Ten years ago, almost to the week, Erin and I went over to Austin to see the joint AFI/Alamo Drafthouse Ten Year Reunion showing of Dazed and Confused. Most of the cast was going to go; they were showing it on a giant outdoor screen “at the moon tower,” complete with keg beer, etc. Tickets were reasonable! We had very little money at the time — I was working, but my client wasn’t paying me often or enough — but we squeezed this out by eating cheap and whatnot.

We made it a weekend, and had dinner at a nice little bistro down on the quiet end of Sixth Street, where we dined with Ol’ Mr Rob at his suggestion — which is its own story, since Rob was in the early stages of dating Mrs Norris at the time, and was sufficiently smitten in an adorably obvious way that he rushed off at meal’s end to visit her at her coffee shop job. (Erin and I ended up getting married not very long after Rob and Joanna, as it happens.)

After Rob made his exit, Erin and I walked around the little gallery-cluster near the restaurant before heading back to the hotel. They were all closed, which is a crucial bit of data, but we saw something amazing and wonderful that resonated immediately with both of us. It was a completely serious painting of a very Victorian and proper-looking otter, done in a very formal style, entitled (in our memories) “Eugenia Smelt, Spinster.”

We made a point of going back the next day, but the price was completely out of reach. I remember it being something close to $1,000, which we simply couldn’t do at all. We left without her, full of regret, and in so doing made a critical error: we did not capture the artist’s name.

Time passed. Money became less tight again, finally. Five or so years ago, I remembered Miss Smelt and hatched a plan to find the painting, or another one by the same artist, as a gift for Erin. And so I began to search online for this phantom artist. I called the gallery, which had (inevitably) changed hands, so they had only a vague idea of the artist I was trying to find. I’ve been told any manner of stories about who she was, or what happened to her in my years of searching, and none of the stories were encouraging. She quit painting. She moved to Ouagadougou. She had a nervous breakdown. No one knows where she is. Her name? Oh, no idea.

All of this sucked. It sucked more because I had a really hard time constructing Google queries that didn’t produce page after page of hits for people who paint portraits of your pets — we loved Bob, but no thanks.

At some point, finally, I figured out who the artist was: Sarah Higdon, and she was clearly still painting. Suddenly, she was on the Internet, and I even managed to find a photo of the Eugenia Smelt painting (which Higdon named “Eugenia Smelt, Unmarried” — I figure the gallery owner took liberties, because Erin and I both remember it the other way).

Here it is, for reference: 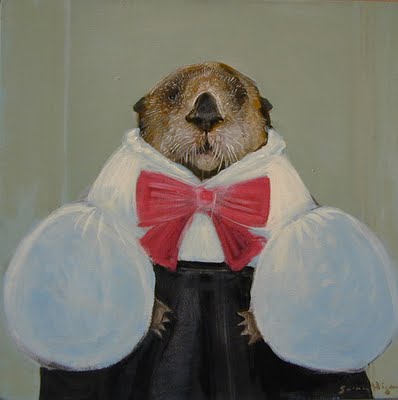 Well, with a web presence, contacting her must be easy, right?

You’d think that. Not so much. I hit a couple email addresses at various galleries, and even one or two that I thought would be the artist herself, but never hit pay dirt. I even wrote to people who had other of her works. They always either bounced, or garnered no response at all. I’d really almost given up, until this April when I thought to try one more time. Here’s what I said:

Some time ago — I think in 2004, but I may be mistaken [I was a year off] — my wife and I were dining at Cafe Josie in Austin on a trip over to see the AFI “Dazed and Confused” anniversary viewing. We remember the trip well, not just because of the fun we had on Saturday, but also because we saw some paintings through a gallery window near Cafe Josie that we really, really liked.

We visited the gallery on Saturday, and admired the works some more, but could not at that time justify spending money on art — the tech downturn was hitting our house kind of hard at the time. Thankfully, that state of affairs didn’t last, but it did keep us from taking one of the works home with us at the time. Foolishly, though, we failed to note the name of the artist whose work we liked so much.

The paintings we saw that weekend were decidedly and delightfully odd: they were paintings of anthropomorphized animals in odd or vintage clothing, in the style of late-19th/early-20th family portraits. The animals are mostly, but not completely, realistic — more than cartoony, but definitely not photorealistic.

I think, at long last, that you are that artist. I first found your web site at SarahHigdon.com, but the clincher is that I think “Eugenia Smelt, Unmarried” (pictured on your Facebook page) was the painting we so fell in love with 9 years ago. Are prints available of that piece? I assume the original has long since sold, but do correct me if I’m wrong…

Sarah replied in less than two hours. When the first line of her mail was “Yay! Quests!”, I knew it was a good sign. Eugenia was of course long sold, and no prints exist, but she’d be happy to paint something similar for us on commission. Would I be interested?

YOU BET YOUR ASS I WOULD. Paypal ensued. The original plan was for this to be Erin’s birthday present — in July! — but when Sarah replied and delivered so quickly, I knew I couldn’t possibly wait.

The new painting arrived on Monday. I somehow managed to keep my mouth shut about it, and just left the box on the couch for Erin to discover when she came home from work.

Heathen Nation, please meet “Felicity Elkins, Alone with her Clam”. We are very pleased, as I think this photo makes obvious: 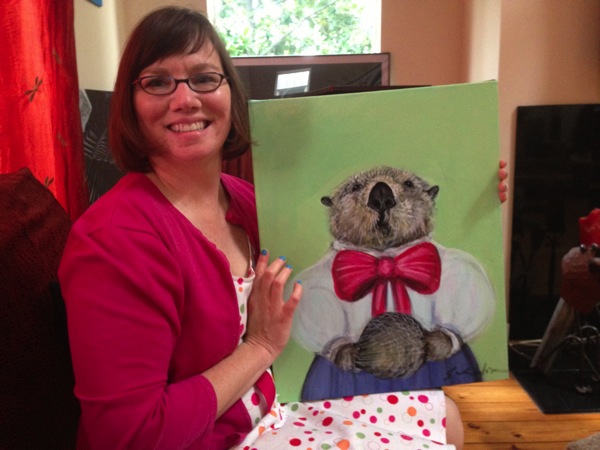 Yay for Sarah Higdon, yay for cool paintings, and yay for QUESTS FULFILLED.