Almost 30 years ago, my friend Rob had a laptop-like device made by Tandy called a TRS-80 Model 100. 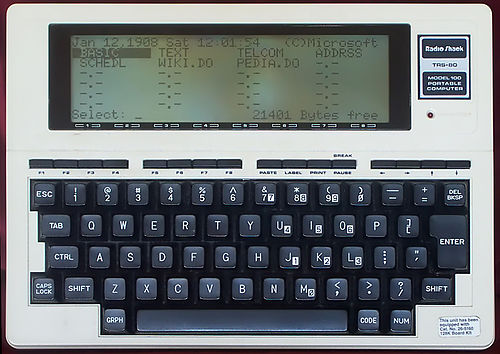 It’s very much a sort of proto-laptop, and was widely used by non-geeks as a portable writing platform when similarly robust and functional laptops were still years away. There’s no hinge; it’s just a flat device with a small LCD screen. You could, if memory served, run programs (i.e., a simple word processor / text editor) or boot the thing to BASIC like every other TRS-80. I remember Rob using it backstage at the all-school production to catch up on a paper for AP English in about 1987.

(A few years later, Radio Shack was selling a descendent product called the WP-2; I bought one to take notes with in college, since (then as now) I can type much more quickly (and legibly) than I can write longhand.)

In the intervening years, laptops have gotten much, much more capable, to the point that for most folks there’s no reason to use a desktop at all. However, if you have a full computer with you, it’s easy to get distracted by other activities — especially if there’s a network connection. What if you just want to write without distractions?

Enter Hemmingwrite. It’s a little precious — the prototype is styled to look like a portable typewriter — but inside it’s reasonably clever:

The Hemingwrite is-a single purpose, distraction-free writing composition device. It combines the simplicity of a 90s era word processor with the modern tech we all require like cloud backups and integration into our favorite document editors like Google docs and Evernote.

I’m not sure I have a need for one, but it sure is neat.