Ars Technica has a pretty interesting piece up about the rise and fall of 8-track, but they miss some bits I wish they’d included.

I grew up in the 70s and 80s, and was always baffled at why those awful things existed in the first place when cassette was also available. The whole weird imposition of the 4 programs, plus the seemingly inevitable need to split songs between programs (complete with fade-out, that chunk-chunk sound, and the fade back in) really put a damper on actual audio pleasure, let me tell you.

Also, contrary to the 2nd graf line (“What went wrong is easily explained with hindsight—though it seemed mysterious at the time.”), there was nothing mysterious to ME about why cassette won, and it’s encapsulated in this fanTAStic Sony ad, which more or less pitches the lack of on-demand rewind as an impediment to getting laid. 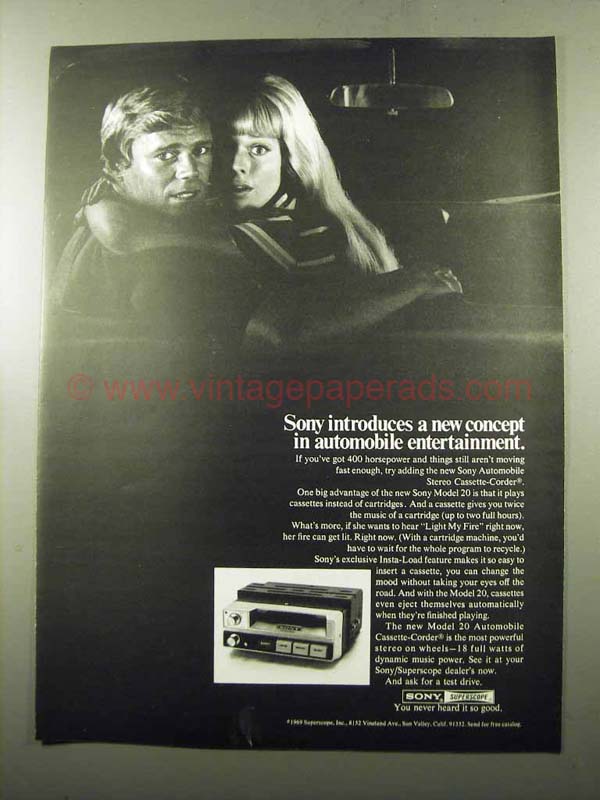 In case you can’t read the text, here it is:

If you’ve got 400 horsepower and things still aren’t moving fast enough, try adding the new Sony Automobile Stereo Cassette-Corder(r). One big advantage of the new Sony Model 20 is that it plays cassettes instead of cartridges. And a cassette gives you twice the music of a cartridge (up to two full hours). What’s more, if she wants to hear “Light My Fire” right now, her fire can get lit. Right now. (With a cartridge machine, you’d have to wait for the whole program to recycle.) (Emph. added.)

What they mean, kids, is that there’s no rewind on 8-tracks. The music was broken into 4 “programs,” and to hear a given song again, you hit the “program advance” button 3 times and then waited for your song to come around again. Awesome, right?

The Draper-worthy Makeout Point location and “cassette = sex” positioning isn’t even the most dated thing about the ad. Look at it. It’s got a whole paragraph of intelligently constructed text extolling the virtues of cassette over 8-track, and it’s written as though talking to an intelligent adult. Find an ad in 2017 that has that much text. I dare you.

The story of how I found the ad itself is pretty hilarious, too, if you’ll indulge me. My dad passed away when I was a teenager, and it fell to me to clean out his office at his veterinary clinic. In a seldom-used drawer, I found a stack of random documents and folded-over magazines — professional journals, newspapers, and popular rags, too. The ad in question was in one of those popular mags, but it was folded over in a way that showed only a page of text on one side and this full-page ad on the other. I was so tickled by the ad, though, that I didn’t notice until several minutes later that it was from Playboy. Which, apparently, my dad really DID have for the articles. ;)