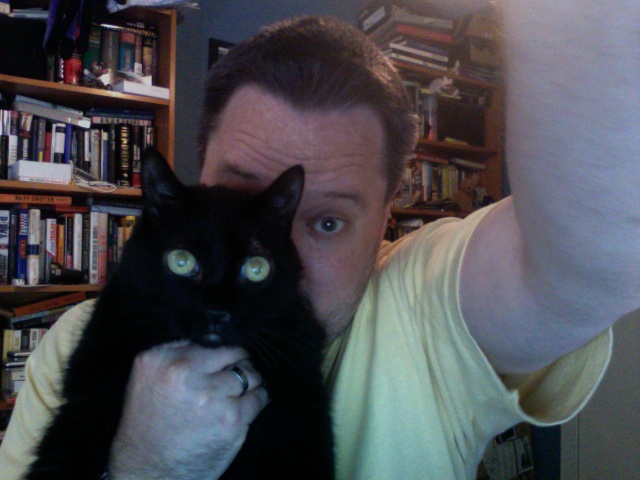 Bob was the only kitten they had at the Tuscaloosa County Humane Society one May morning in 1992. Scrawny and underfed and, frankly, kinda ugly, she was still full of personality. She reached through the bars of her cage and meowed louder than you’d think reasonable when I got close, and when I picked her up to take her home she started purring louder than any cat I’ve heard before or since.

When we took her to be vaccinated, she was still purring so much the vet had to thump her on the nose so he could hear her heart. As a kitten, she was obsessed with open mouths — what IS that? Can I see in? — and with long hair.

Bob was actually a gift to the girl I was dating at the time, since her cat was dying of feline leukemia. I kept her in my place since, for a little while, we had poor, doomed Hudson in Cassie’s apartment (conveniently across the parking lot). When we moved in together a while later, Bob learned what Cassie’s car sounded like, and would leave my study to wait for her at the front door every day when she came home. The apartment faced a parking lot; cars came and went all the time — but Bob knew which one was Cassie’s.

Bob and I moved to Texas in 1994 — somehow I got custody when Cassie and I split up — and Bob became a bit more reclusive and a bit more owner-focused. If I stayed in my car to listen to the end of an NPR story, my roommates would complain because Bob would meow at the back door until I came in. She took a dim view of other animals, including, memorably, a certain husky who desperately wanted to be her friend — and, more hilariously, a friend’s labrador who’d come to visit. With people, she was just selective; I’ve had friends over the years who didn’t know I had a cat. When I was single, she made it very clear she thought one brief relationship was a bad idea. It cost me a comforter.

Knocks at the door and doorbells always freaked her out. She’d run to a hiding spot, growling slightly under her breath, until the threat passed — or until she realized the visitor was on her short list of other acceptable humans, like Eric or Lindsey, or Sharon or Greg, or — oddly — my infrequently visiting mother, whereupon she’d remerge and be social.

The doorknocking thing also came in handy for me, since I frequently have things delivered. Bob started correlating the arrival of a big truck outside with impending knocks, so I could tell if the UPS guy was about to show up and knock on the door by her own little growly-retreats.

Bob’s always been all about me, so when Erin came around in 2002, we decided to let Erin be the foodgiver. That worked out fine — Bob loved Erin just as much as me pretty quickly — but had some unintended consequences. Bob had learned that waking up Chet was not acceptable, as I’d just shove her off the bed, but Erin was a soft touch, so Bob developed a habit of tapping Erin on the face when she was hungry. Tap tap tap. Wait. Tap tap tap.

When I started working at home after the tech crash, Bob was understandably much happier. She’s spend most of the day on the desk, sometimes on a pile of “decoy papers” I’d lay out to distract her from my actual work documents, but eventually she figured out that the cozy spot formed by the back of the keyboard, the edge of the desk, and bracketed by my forearms was just the right size for napping. I do a lot of writing in my work, so I’d be pretty still for long periods. That suited Bob just fine. She’d tuck her head into the crook of my left elbow and, as God is my witness, snore.

At night, she’d do kind of the same thing. I tend to sleep on my back, so she’d wait until Erin and I were settled and then come and curl up between the crook of my right elbow and my armpit, usually with her head resting on my arm, sometimes under one of her own paws. Other times, like in cold weather when Erin and I were given to spooning, she felt most comfortable as the “innermost spoon”. If she awoke to find herself facing a back, she’d get up and crawl over us in a way I swear was meant to be indignant, sometimes with grunts, until she found her way to the concave side again. And she always figured out a way to take way more than her share of the bed; quite a feat for an 8-pound cat on a queen-size mattress. But of course, we are talking about an 8-pounder who went all Matrixy on a lab, so there you go.

Bob got sick a long while back, in 2000 or so. She picked up a herpetic sinus/eye infection when I boarded her one Thanksgiving, and it’s been a battle ever since. The sneezing — sometimes productive, unfortunately — was chronic and pretty everpresent, but the real nastiness was in the flareups. When they happened, she’d get really horrific swelling on the right side of her face, centered around her lower and third lids, sometimes obscuring the eye entirely. We got to be good friends with a local veterinary ophthalmologist, who managed to knock the flareups back pretty handily with a complicated cocktail of drugs delivered by ointment, food supplements, and pills, and they typically did the job pretty well. One of them I got pretty good at popping down her throat until a few years ago, when I figured I’d let Bob smell the quarter-pill first. She sniffed it twice, and then ate it out of my hand. Well, there you go.

A few months ago, Bob stopped coming down to my office as much. She was quite happy to “help” me if I worked on the couch, so I didn’t think much of it. Then, while I was traveling nearly full time, Erin noticed she was bumping into things; we think she gradually went blind, and had started avoiding the less-predictable layout of the office as a consequence. Oh well, we thought, she’s 17.

About two weeks ago, though, she had another flareup, the first in years. This time, there were more problems. Her blood pressure was very high, and they worried about renal problems — a common endgame for cats. We went with the usual wonder cocktail, but it didn’t help as much or as quickly. Late last week, she was clearly not well, and stopped coming upstairs to sleep with us. We hoped the meds would help turn her around.

Then, at the worst possible moment, we had to leave town for a funeral. Sharon took care of her for us, but called us Monday morning with bad news. Bob was much worse. What vet should she take her to?

The specialist could do little for her, so he sent her to our nominal “general” vet. That vet quickly sent Bob and Sharon to the internal medicine people for around the clock care. The situation was grave, but not without hope.

Hope left late yesterday. I flew home from Kansas early today, and my driver took me from the airport directly to the specialist’s office, where we met Erin and Sharon. We held Bob one last time, and then let her go.

Bob was nearly 18 years old. I got her when I was 22; I’m nearly 40 now. I can type all this out just fine, but I can’t begin to talk about her. Erin and I are shattered and heartbroken, and the house is horribly empty without her on the couch between us tonight. And I don’t know what else to say other than I miss her horribly.