It’s from April, but this long profile in the New York Times (!!) is worth your time.

This video is actually pretty great, and zeros in on an aspect of the modern flat earth “movement” that I think lots of folks miss. It boils down to a sort of scientific solipsism, wherein the adherents distrust anything and everything they cannot explain or experience with their own senses.

Modern science stands on the shoulders of giants. Probably no one understands it ALL, but we trust the scientific method, peer review, etc., to lead us towards the light. Flat Earthers see the implications of modern science, find it at odds with their lived experience, and choose their own naive POV over that of the scientific community.

In the 1800s, there was a similar problem; a man named Samuel Rowbotham pushed a school of thought he deemed “zetetic inquiry.”

In the Flat Earth sense, the term refers to flipping the scientific method on its head and deriving one’s observations from testing, with no regards to any hypothesis. Of course, if you did scientific inquiry this way, you’d end up with stating that a sphere is flat just because it looks flat to a relatively minuscule observer on its surface.

Owing presumably to quarantine, the current issue of the New Yorker is all material from their archives.

It being the New Yorker, they’re all gems — including a man-on-the-ground piece about Black voter registration efforts in Mississippi in 1964 that includes a conversation with Dr King — but the most surprising is this, their choice for fiction: 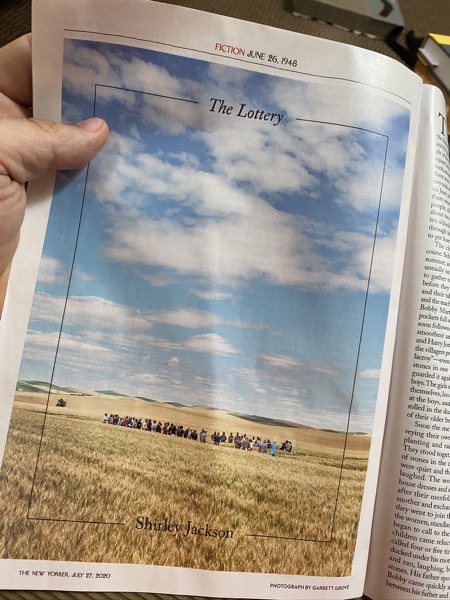 The reason the Feds feared and vilified the Black Panther Party — and eventually assassinated its leaders — was that they were effective and they were actually helping poor Black people, and, well, ours is a racist government.

Amazon has produced an adaptation of the graphic novel Radioactive, about the life of Marie Curie. Rosamund Pike stars. I am sold.

After watching the trailer, I was shocked to re-discover a couple things about her. Obviously, there’s the whole “was the first female winner of the Nobel, and then did it AGAIN 8 years later” thing — and, by the way, at the time no one had won the Nobel twice before.

But there’s also the following. See, while she basically discovered radioactivity, the dangers of atomic radiation were absolutely not understood at the time. I knew she died from this — her constant exposure and lack of protective equipment led to her death, at 66, of aplastic anemia, but also gave her cataracts and a host of other problems.

And those problems aren’t over:

She was interred at the cemetery in Sceaux, alongside her husband Pierre. Sixty years later, in 1995, in honour of their achievements, the remains of both were transferred to the Paris Panthéon. Their remains were sealed in a lead lining because of the radioactivity. She became the first woman to be honoured with interment in the Panthéon on her own merits.

Because of their levels of radioactive contamination, her papers from the 1890s are considered too dangerous to handle. Even her cookbook is highly radioactive. Her papers are kept in lead-lined boxes, and those who wish to consult them must wear protective clothing.

I know what you’re thinking. You’re thinking “Chet, where can I find a high quality, relatively short video on heavy trucks intended for sub-zero use?”

This short documentary — just 36 minutes — is FASCINATING. It’s about the development of the Soviet Union’s Antarctic overland snow tractor in the 1950s. The design ended up having some drawbacks, but the three examples they made saw daily use down there for FIFTY YEARS, and the gen-2 version may still be in use.