Ewan McGregor is all-grown-up Christopher Robin in the upcoming film of the same name.

It looks to be a very by the numbers take on the “grown up revisits childhood to remember what’s important” trope, and yet shut up and take my money. Seriously.

Hayley Atwell is his wife. In theaters August 6.

Erin and I do, for SURE: it’s the Isabella Stewart Gardner Heist, which remains UNSOLVED.

BoingBoing is featuring a podcast on it this week that may be worth your time.

You oughta read this.

William Eggleston first tried peyote one summer in the early 1960s while visiting a friend in Oxford, Mississippi. You can find the story in a memoir by University of Mississippi football star (and later Dark Shadows actor) Jimmy Hall, who was there at the time. Eggleston had invited Hall to join him and his friend, and the three men puzzled over the green-blue cactus in its cardboard box, purchased via mail-order from a nursery in Laredo, Texas.

The house in the photograph belonged to a man named Tom “T. C.” Boring, a dentist born and raised in Greenwood, whom Eggleston has described as the best friend he ever had in the world. He was the scion of a well-respected Delta family, a sharp and promising Southern archetype who glided his way through the University of Mississippi, Loyola University, and the Navy before coming home to Greenwood and gradually, ungracefully losing his mind.

[…]Boring had a penchant for exotic plants, younger women, and corn whiskey. In public, he often wore tweed suits and turtleneck sweaters, and smoked a pipe. But more often than not, he wore as little as possible; at home, he preferred to avoid clothes altogether. At the height of summer, he’d keep his air-conditioner cranked up to full blast so he could always have a fire going in his living room, for ambiance.

He slept odd hours. He made cryptic jokes. He owned a number of iguanas. His prized possession was his pet capybara, which he’d walk around the neighborhood on a leash.

(Astute readers will of course note that the photo mentioned in the title is also the album cover for Big Star’s Radio City, though the edition you probably own is a combo CD with #1 Record that has a different cover.)

Wylie Overstreet took his telescope out to the streets of LA, and showed people the moon.

So, this story is already bananas, right?

It’s crazy even before you get to this:

BUT IT GETS MORE NUTS, because these are the links at the bottom for “related stories”:

“You should never overcook a soufflé.”

Every wonder why there are so many Thai restaurants? Given the proportion of Thai folks in the US, they punch WAY over their weight class in terms of ubiquity of cuisine (which is awesome), but how did that happen?

Using a tactic now known as gastrodiplomacy or culinary diplomacy, the government of Thailand has intentionally bolstered the presence of Thai cuisine outside of Thailand to increase its export and tourism revenues, as well as its prominence on the cultural and diplomatic stages. In 2001, the Thai government established the Global Thai Restaurant Company, Ltd., in an effort to establish at least 3,000 Thai restaurants worldwide. At the time, Thai deputy commerce minister Goanpot Asvinvichit told the Wall Street Journal that the government hoped the chain would be “like the McDonald’s of Thai food.” Apparently, the government had been training chefs at its culinary training facilities to send abroad for the previous decade, but this project formalized and enhanced these efforts significantly.

The McDonald’s of Thai food never quite materialized as a government-operated megachain, but the broader goal of a government-supported increase in the number of Thai restaurants abroad has. The Thai government has continued earmarking funds for the global proliferation of galangal root and fish sauce, and it’s paid off.

The strategies for achieving this increase were manifold, run in parallel by various departments of the government. The Ministry of Commerce’s Department of Export Promotion, most likely run by bureaucrats rather than restaurateurs, drew up prototypes for three different “master restaurants,” which investors could choose as a sort of prefabricated restaurant plan, from aesthetic to menu offerings. Elephant Jump would be the fast casual option, at $5 to $15 per person; Cool Basil would be the mid-priced option at $15 to $25 a head; and the Golden Leaf prototype would cost diners $25 to $30, with décor featuring “authentic Thai fabrics and objets d’art.” (Does your favorite Thai spot have objets d’art? The restaurant may have been built from a government prototype.)

This is brilliant and awesome.

Scary as FUCK, that’s what.

Seriously, though, it’s a timed, multilap bicycle race over a relatively short closed course. We had one here in Houston on Sunday morning, and while I don’t participate, I have a lot of friends who do.

It’s not one big race, obviously. Bike racing, like most sports, is split into levels. Let’s be clear, too: Cat 5 riders are CRAZY strong compared to non-racing folks. I’ve been doing pretty serious structured workouts for 6+ months now, and I’m absolutely sure that I’d still be dead last in any competitive Cat 5 field.

And for logistics purposes, these categories combined for actual races. For example, we had friends in 4 different races on Sunday morning:

Jason was doing well going into the final lap, but in close-quarters riding like this crashes are a risk, and they had one. Jason didn’t go down, but he was behind it enough that it blew his finish.

Someone very close to Jason in the peloton had Garmin cameras on the front and back of his bike, and has posted the final lap. You don’t really see Jason until the post-crash moments, when he edits in the rear-facing footage, but when you do it’s super clear how close he came to being in a super scary sprinting pileup. 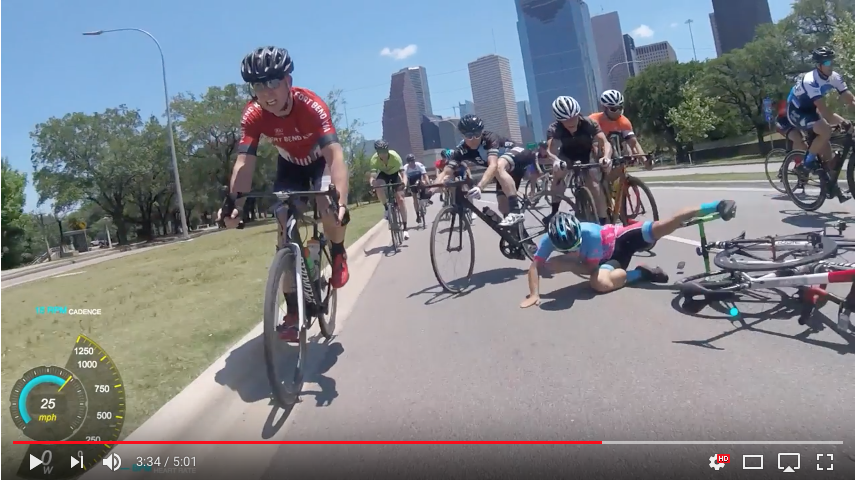 And here’s the whole video:

Stay with the video until the finish, and pay attention to the lower left; the camera setup used by the rider allows him to superimpose his speed and power on the screen. Yes, they’re sprinting at 40MPH.

For more fun footage, check out this guy’s 7:30 video, which includes some sweet overhead drone footage.