Let’s Get It On

Seen on my Facebook feed moments ago (and anonymized): 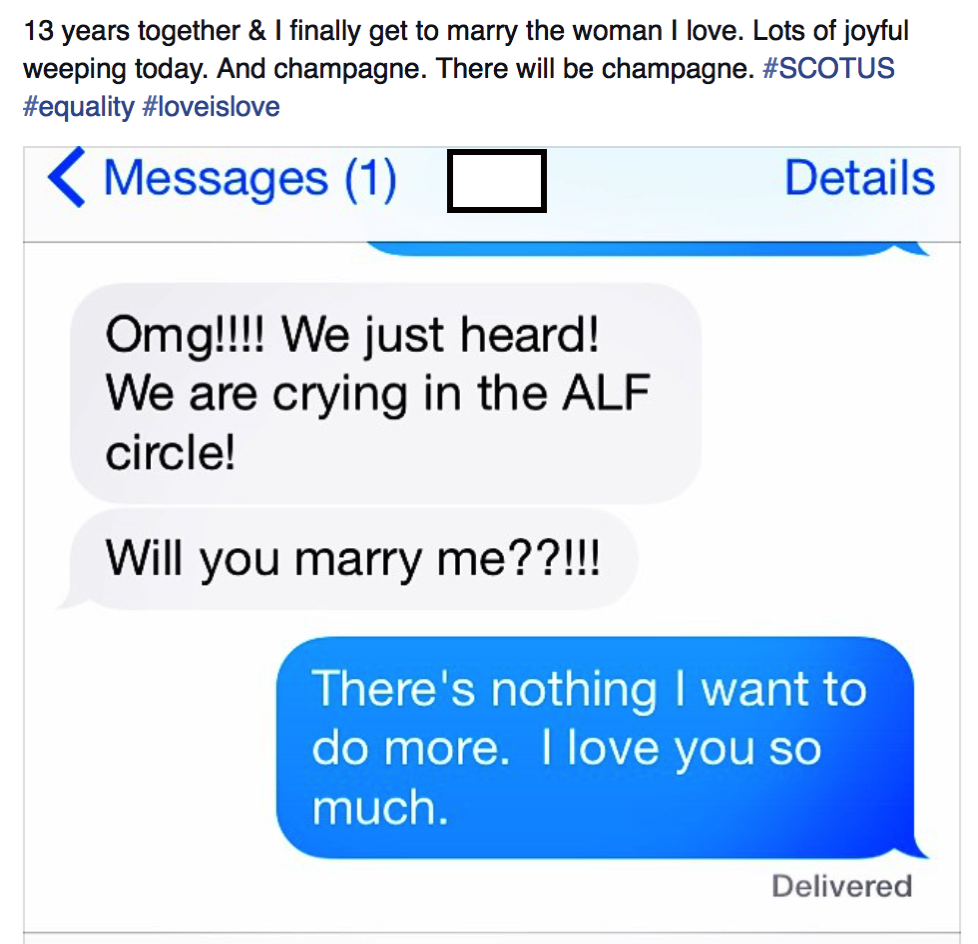 I may have something in my eye.

Ten years ago, Mrs Heathen and I used a quote from Massachusetts Chief Justice Margaret Marshall’s opinion in the 2003 case Goodridge v. Department of Public Health. It’s as stellar today as it was when she wrote it in 2003:

Marriage is a vital social institution. The exclusive commitment of two individuals to each other nurtures love and mutual support; it brings stability to our society. For those who choose to marry, marriage provides an abundance of benefits. In return it imposes weighty legal, financial, and social obligations. Without question, marriage enhances the welfare of the community. It is a social institution of the highest importance.

Marriage is at once a deeply personal commitment to another human being and a highly public celebration of the ideals of mutuality, companionship, intimacy, fidelity, and family. Because it fulfills yearnings for security, safe haven, and connection that express our common humanity, marriage is an esteemed institution, and the decision whether and whom to marry is among life’s momentous acts of self-definition.

It seems weird to me, in the Roberts era, to celebrate three major court victories in a week, and yet, here we are in a week with King v. Burwell, the fair housing case here in Texas, and Obergefell.

Me, I just had a bourbon.

Our friends at Talking Points Memo have a great piece up about the history of Juneteenth. Pick up on it.

Apparently, it’s illegal to carry cash in the US, and the penalty is the loss of the cash. 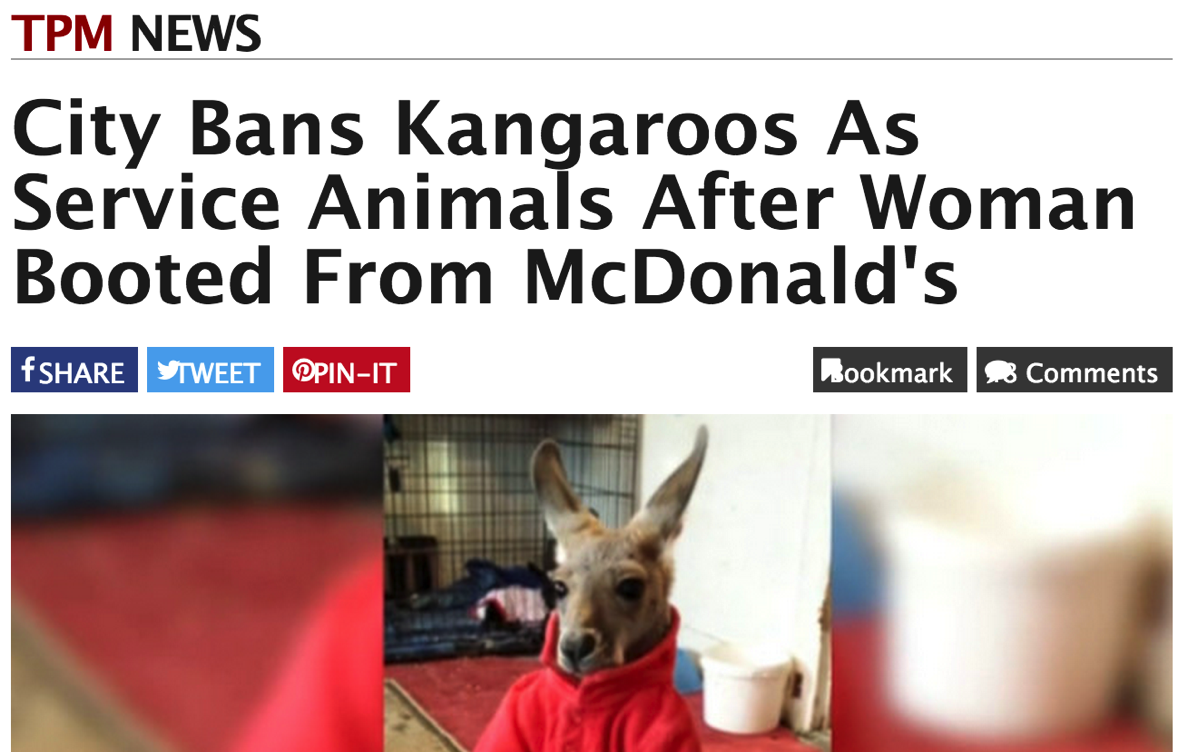 Non-insane Texans sent our doofus jackhole of a governor tin foil after his Jade Helm comments.

There exists someone named Tokyo Sexwale who is neither an amorous, Japanese marine mammal nor a character in a Pynchon novel.

He is, of course, now leading a FIFA monitoring committee on Palestine.

Carry on. As best you can, anyway.

You may have heard that Bradley Wiggins set a new record for the Hour last week.

Former recordholder Jens Voigt had this to say: 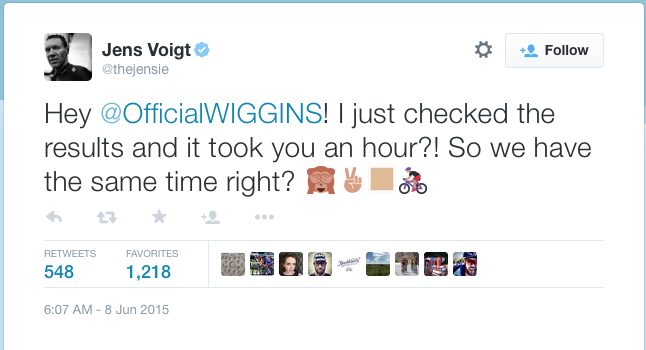 So, obviously, I’m all over his run at Game of Thrones. Don’t miss.

News that the Transportation Security Administration missed a whopping 95% of guns and bombs in recent airport security “red team” tests was justifiably shocking. It’s clear that we’re not getting value for the $7 billion we’re paying the TSA annually.

But there’s another conclusion, inescapable and disturbing to many, but good news all around: we don’t need $7 billion worth of airport security. These results demonstrate that there isn’t much risk of airplane terrorism, and we should ratchet security down to pre-9/11 levels.

We don’t need perfect airport security. We just need security that’s good enough to dissuade someone from building a plot around evading it. If you’re caught with a gun or a bomb, the TSA will detain you and call the FBI. Under those circumstances, even a medium chance of getting caught is enough to dissuade a sane terrorist. A 95% failure rate is too high, but a 20% one isn’t.

I added the emphasis. He’s absolutely right. Go read the whole thing, but here’s a zinger from a few paragraphs in:

I saw this morning that Christopher Lee, an actor whose 93-year-run included (as pointed out by Scalzi) “stabbing Nazis, making movies, and releasing heavy metal albums in [his] 90s”, has died.

That’s pretty awful in a passage-of-titans sense, but to have it followed by the news of Ornette Coleman also shuffling off this mortal coil (at an entirely respectable 85) makes for a shitty morning, my friends.

This Owl is Sketchy.

(Both from Sunny Mabrey.)

So Denny Hastert is in trouble. Mostly, my reaction is as you’d expect: depressed amusement at the predictability of a scolding hack getting popped for misconduct like this. But there’s more here, and you should delve into it, because what’s happening to him is really kind of alarming.

The always-on-point Ken White over at Popehat has written up an examination of the charges against Hastert and how they came to be, and if you’re not a little freaked out by the process I don’t know what’s wrong with you. Basically, the Federal prosecutors can target just about anyone and take them down because of how “creative” they can get with astonishingly broad interpretations of federal law that are generally supported by the courts. Put simply, if they decide they want you, they can get you. After all, you very probably commit Three Felonies A Day (more here); the extremely broad laws and broader interpretations give Federal prosecutors enormous power that is basically unchecked by anyone. “Trust us” is a shitty insurance policy against power of this nature.

Hastert isn’t going down for diddling little boys or for bribery. He’s not going down for fraud. He’s being charged with structuring transactions –his withdrawals were all less than $!0,000 — and for lying to the Feds about the purpose of the cash:

The indictment has mostly inspired chatter about what it doesn’t say. Hastert is charged with structuring withdrawals of less than $10,000 (so that they would not be reported to the IRS) so that he could pay off an unidentified person for Hastert’s unidentified past misconduct. What past misconduct, or threatened accusation of misconduct, could lead Hastert to pay $3.5 million? The indictment doesn’t say, but it has been drafted to imply that the allegation of past misconduct relates to Hastert’s job as a teacher and coach in Yorkville, Illinois. Hastert isn’t charged with doing anything to the accuser, and the accuser isn’t charged with extortion.

We imagine law enforcement operating like we see on TV: someone commits a crime, everyone knows what the crime is, law enforcement reacts by charging them with that crime. But that’s not how federal prosecution always works. Particularly with high-profile targets, federal prosecution is often an exercise in searching for a theory to prosecute someone that the feds would like to prosecute. (Emph. added)

The takeaway is simple:

From the citizen’s perspective, this situation points to one obvious conclusion: shut up. Never answer a federal agent’s questions without a thorough debriefing with a qualified lawyer first.

It may or may not be the case that Hastert did something terrible. In a free society, though, law enforcement must work within limits. If it’s the case that he molested boys, but no complaint was made at the time, and the statute of limitations has passed, it may be tempting to endorse the actions of the FBI and the federal prosecutors here, but that’s a bad path. The tactics in question are downright scary to me, even when applied to someone like Hastert.

Turns out, the FBI has a secret air force they use to fly around and monitor cell phones.

Scores of low-flying planes circling American cities are part of a civilian air force operated by the FBI and obscured behind fictitious companies, The Associated Press has learned.

The AP traced at least 50 aircraft back to the FBI, and identified more than 100 flights in 11 states over a 30-day period since late April, orbiting both major cities and rural areas. At least 115 planes, including 90 Cessna aircraft, were mentioned in a federal budget document from 2009.

For decades, the planes have provided support to FBI surveillance operations on the ground. But now the aircraft are equipped with high-tech cameras, and in rare circumstances, technology capable of tracking thousands of cellphones, raising questions about how these surveillance flights affect Americans’ privacy.

Basic aspects of the FBI’s program are withheld from the public in censored versions of official reports from the Justice Department’s inspector general, and the FBI also has been careful not to reveal its surveillance flights in court documents. The agency will not say how many planes are currently in its fleet.

The planes are equipped with technology that can capture video of unrelated criminal activity on the ground that could be handed over to prosecutions. One of the planes, photographed in flight last week by the AP in northern Virginia, bristled with unusual antennas under its fuselage and a camera on its left side.

Some of the aircraft can also be equipped with technology that can identify thousands of people below through the cellphones they carry, even if they’re not making a call or in public. Officials said that practice, which mimics cell towers and gets phones to reveal basic subscriber information, is used in only limited situations.

“These are not your grandparents’ surveillance aircraft,” said Jay Stanley, a senior policy analyst with the American Civil Liberties Union. Stanley said the flights are significant “if the federal government is maintaining a fleet of aircraft whose purpose is to circle over American cities, especially with the technology we know can be attached to those aircraft.”

The TSA missed 95% of weapons and explosives in an undercover test.