Last night, I noticed my bike’s saddle was broken. It probably got cracked in a paceline pile-up on a ride back in late August, but didn’t actually fail until my ride Sunday or last night. Either way, its supports are totally broken on one side, so it’s unusable for the Ride to the River this weekend.

So I load up my bike to take it over to West End, and noticed the first bit of good luck today: my MS150 fundraising gift certificate finally showed up. I figured it for (part of) a new helmet, but under the circumstances it seemed clear I was about to turn it into a saddle instead and put off the helmet upgrade.

At the shop, my day improved again when they told me “We’ll just warranty that saddle. Go get another one of the wall.” Yeah, the saddle that came on my bike when I bought it LAST OCTOBER. Score one for using a local shop for sure.

While they installed the new saddle, I looked at helmets. I picked one that cost a little more than the gift cert covered, happy to supplement with cash to get a nicer lid. Well, never mind that; West End took the GC as full payment even though it only covered 75% of the cost. Score #2!

I rolled out of the shop having spent no actual cash, and headed to lunch at Hubcap. Ricky was there, and was excited to tell me all about the goings-on for his Galveston place. If you’ve run into him before, you know his excitement is contagious, so that was super fun. It got even MORE fun when my order mysteriously appeared on my table (vs. the window) well before I had any right to expect it. My suspicions were confirmed when they called the next number, which was still 7 tickets lower than the one I was holding.

My working theory is that I must’ve done something right I don’t remember doing.

GAZE UPON THE WONDER OF THE ENDLESS SPIRAL TRAIN.

The FBI has a long post-9/11 history of ginning up plots to foil; the pattern is generally “find an inept loner who may have said something weird online, and then entice him to take part in a ‘plot'”. The issue is, of course, that (a) the aforementioned loner is typically the only non-cop involved; and (b) in the absence of the fabricated plot, it’s exceedingly unlikely that these inept doofuses would have ever become involved in any domestic terror efforts at all.

Well, now we have something even worse. Turns out, that Chinese professor at Temple they arrested was never actually doing anything wrong, and the FBI could have known this from day one had they bothered to check their own evidence.

Temple University physics professor Xiaoxing Xi made headlines back in May, when he was indicted for allegedly sharing “sensitive” information with colleagues in China about a piece of laboratory equipment used in his superconductivity research. Xi maintained his innocence from the start. On Friday, he was vindicated: the U.S. Justice Department dropped the charges against him, with a vague statement about new information coming to light.

This “new information” came in the form of several sworn affidavits from leading scientists confirming that schematics Xi sent to Chinese scientists had nothing to do with the proprietary device. Apparently nobody involved in the investigation thought to run their case past knowledgeable scientific experts before bursting into Xi’s suburban home with guns drawn, ransacking his house, and leading him off in handcuffs in front of his wife and daughter.

I mean, come ON people! If you’re going to drag a man’s name through the mud, you have an obligation to be RIGHT.

Apparently, if you are both drunk and Scottish, it is unlikely you will be able to say “Purple burglar alarm.”

is the graph of my cycling miles per week over time, as supplied by Strava.

I dislike the long, barren spot in the middle, but I love the trendline happening on the right. (I will also note how hacked off I am about the empty week there, in which every single ride that week was either rained out or logistically impossible. Grrrr.)

By now you’ve seen the #IStandWithAhmed hashtags, and know the basic story of a gifted young 14-year-old in Irving who made a clock to take to school and show his engineering teacher. (By the way, the presence of the phrase “engineering teacher” should tip you off that this is a relatively well-to-do part of Dallas.)

Some other teacher saw it, and decided that anything with a circuitboard and wires and a display must be a bomb, and so sent him to the principal’s office, despite Ahmed’s apparently incredulous and constant assertions that it was a clock.

The principal — some fuckwit named Dan Cummings, who should be hounded from education forever if there’s any justice in the world — could have taken one look at the electronics hobby project and realized the English teacher was an idiot, but instead decided that, he, too, needed to board the Racist Jackhole Express and involve the Irving police department. 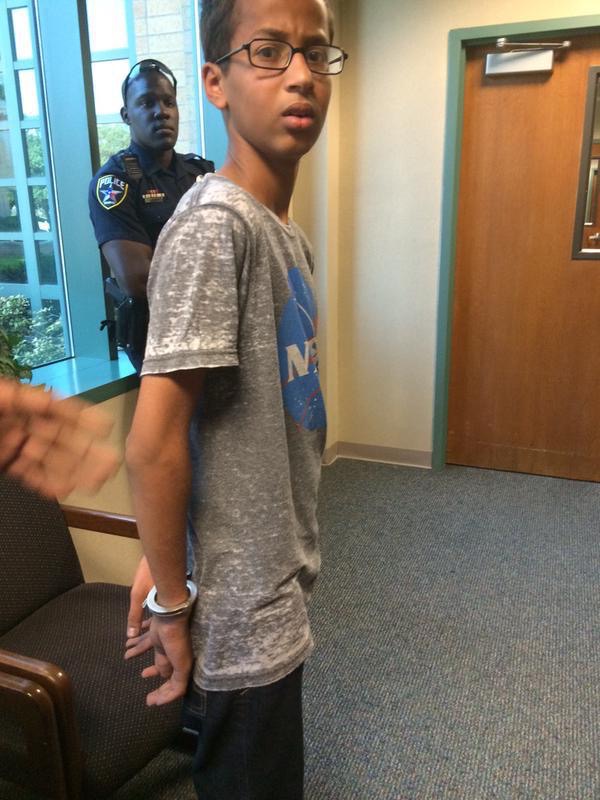 If we lived in a world where calling the police is always a good idea, we might have hoped for at least one of THEM to realize what idiots the MacArthur teacher and principal were. In that world, Officer NotAnAsshole would have laughed in Danny’s face and sent Ahmed back to class.

This is, of course, not the world we live in. So OF COURSE the cops immediately arrested young Ahmed on one count of Making While Brown and one count of Being Smarter Than Us. And then frogmarched him off campus in handcuffs, I shit you not. Ahmed was eventually booked, fingerprinted, taken to juvenile detention, and suspended for three days, despite not actually having committed any legitimate infraction at all.

The cops, for their part, did eventually state that there would be no charges, which sounds magnanimous unless you’ve been paying attention at all. Expect a giant fucking lawsuit, but the real shame is that pitiful-excuse-for-educator Dan Cummings will pay no price, nor will the English teacher, nor will the just-doin’-my-job cops involved.

Popehat really nails it down here, where he begins

American lives are controlled by the thuggishly mediocre. The best measure of their control is this: when called out on their mediocre thuggery, they can comfortably double down.

Ahmed Mohamed, a bright and curious ninth-grader in Irving, Texas, learned that to his regret this week.

Double down is, of course, exactly what the thuggishly mediocre shitheels at Irving ISD have done, in a letter circulated to parents that emphasizes how heroic they were in having a nerdy freshman arrested for the crime of “making shit”.

Fortunately, a positive aspect of our world in 2015 is that the condemnation of this jackassery in Irving has been swift, broad, and nearly instantaneous, and includes high-profile participants from MIT, JPL, the Mythbusters, and a dude who lives at 1600 Pennsylvania. I hope the global shaming continues. I’d like to see someone with both a brain and a spine replace Cummings at Ahmed’s high school, but that seems like way too much to hope for. What we will get, I expect, is pro bono legal help in their inevitable suit, plus no end of scholarship and other offers from folks with similar backgrounds (either nerdy, foreign, or both) who want to help this kid out. So there’s that. And, in the absence of seeing Dan Cummings and his ilk forever consigned to pushing a broom in a Dallas reform school, it’s probably all we can really hope for.

There’s more here, and at BoingBoing.

Reflecting on terrorism post-9/11: So, are we batting 1,000, or was the threat overblown in the first place?

Disapproval in all cases is registered verbally, and, in some cases (e.g. #10), with vigorous squirming. Violence is never on the menu.

Talking Points Memo’s Josh Marshall built a boat with his 8-year-old son despite having no previous woodworking experience.

Note: the elephant wasn’t actually at Public Services. Justin is really strict about that.

“Is Willie or Waylon in the pool?“

People are really burying the lede on this. Clearly it’s awesome that one raccoon is distressed by the other’s aquatic adventurism, but it’s even MORE awesome that these people apparently have two raccoons named “Willie” and “Waylon.”

There is, apparently, at least one way to skin a watermelon.