Police in Indiana became upset about a teacher’s project on fascism, and shut down the school in protest.

I mean, if the shoe fits…

Please join me in wishing a happy 50th birthday to a truly OG Heathen & ersatz attorney, Edgar Acosta, seen here in a defining moment from (eek) 20 years ago: 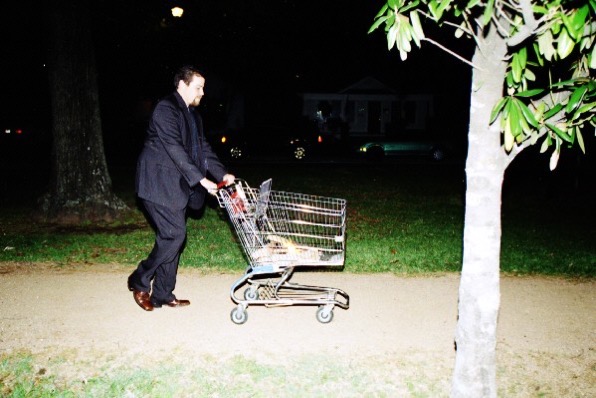 Over Halloween weekend, the Vermont jam band Phish played a series of concerts in Las Vegas. Several days later, one attendee posted to Facebook that he had tested positive for COVID-19 — and more than 500 replied, most saying that they or someone they knew had also tested positive after attending the concert.

I’ve always thought that Phish a contagion, but this is not how I expected that to manifest.

Variety is reporting that Scorsese is planning to direct a Jerry Garcia biopic starring Jonah Hill.

The GOP really, really hates talking about racism, so in New Hampspire, it’s now illegal — at least in the classroom:

The New Hampshire state legislature passed House Bill 2, the Right to Freedom from Discrimination in Public Workplaces and Education, earlier this year and Sununu signed it into law in June. The bill text says the law “prohibits the dissemination of certain divisive concepts related to sex and race in state contracts, grants, and training programs.” It goes on to describe “divisive concepts” as a number of different things, including ideas like New Hampshire or the United States being “fundamentally racist or sexist” or anything that indicates “an individual, by virtue of his or her race or sex, is inherently racist, sexist, or oppressive, whether consciously or unconsciously.” The passage of the New Hampshire law was part of a broader trend that’s been playing out in red states as Republicans fear-monger about the academic framework called Critical Race Theory, manufacturing outrage about the concept for the better part of the past year.

By Johnny Marr, with no creaking aging dimwit fascists at all.

I will not be taking questions at this time.

The Saturday Afternoon Ikea Trip Simulator is a text adventure about Ikea. Enjoy.

Netflix has released a board game based on their runaway hit The Queen’s Gambit, which is, of course, already about a board game.

“Research on fraternity men has continuously found that they are much more likely to commit sexual violence than men not in fraternities.” More than three times as likely, even though, as one study showed, their prior histories of sexual violence were equivalent. So what was responsible for the increase? According to the report, “It appeared to be the fraternity culture itself.”

They are just as bad as we have always known them to be. End them.