Sure, the trailers LOOK good, but so far the DC films haven’t exactly covered themselves in glory, so I was kinda keeping the whole thing at arm’s reach.

Then I noticed something important, largely because (a) The Hollywood Reporter tweeted something ignorant/clickbaity that was (b) then shamed into my timeline: 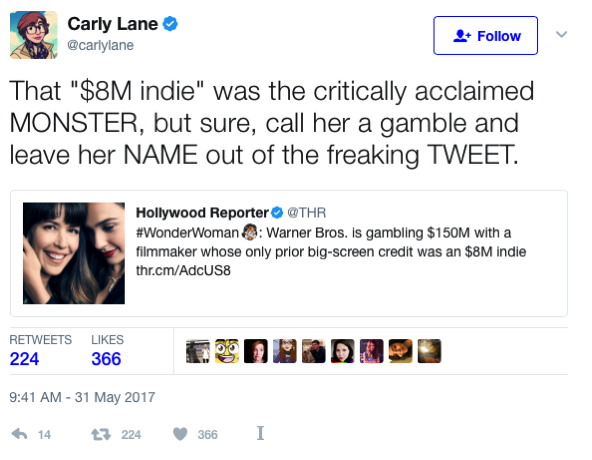 Yep. Wonder Woman is directed by Patty Jenkins, whose first feature was the Oscar-winning Monster in 2003 (which she also wrote, btw).

Sold. Hey, Mrs Heathen, when are we going?

No, really. An astoundingly well preserved dinosaur fossil has been found; check it out.

I think my friend T. framed it best: “Please dunk on this extremely bad at life family with me.”

A key bit is this:

In September, we had learned that I was pregnant with our second child and we accelerated our plans. We needed a place with at least three bedrooms. Unfortunately, that dream was becoming increasingly unrealistic for a young family without a lot of money. Julian had just finished his PhD in education and was teaching part-time at Humber; I was an editor for the Food Network’s website and preparing to go on maternity leave. Still, we scoured the listings every day, searching for a fixer-upper that we could renovate ourselves to save money. We weren’t particularly handy, but we’d seen all the home reno shows, and it seemed like everyone in the city was doing it. How hard could it be?

And it gets so much more bizarre, privileged, and tone-deaf — oh, and dumb as hell. For example: they end up spending their half-million-plus budget on a house they had not personally seen or inspected, and entered into a no-condition contract. They end up fine, apparently, but only because of the largesse of wealthy family and friends, and despite some astonishingly stupid choices.

Word comes that Roger Moore has died at 89.

Moore, obviously, is known as the post-Connery Bond, but true nerds recall that he was actually the third guy to play 007 (in the Eon Productions films, which are all that really matter). When Connery bowed out after his fifth outing (You Only LIve Twice in 1967, which is the one where he teams up with a Japanese agent and goes undercover in, basically, yellowface before the final fight in a volcano base), Australian model George Lazenby took over for a single picture (the underrated On Her Majesty’s Secret Service, co-starring Diana Rigg and Telly Savalas!) before Connery’s code (Diamonds are Forever, featuring a thinly-veiled Howard Hughes proxy and Crispin Glover’s dad as one half a very creepy assassin team). Moore first appears in the next film, 1973’s Live and Let Die. 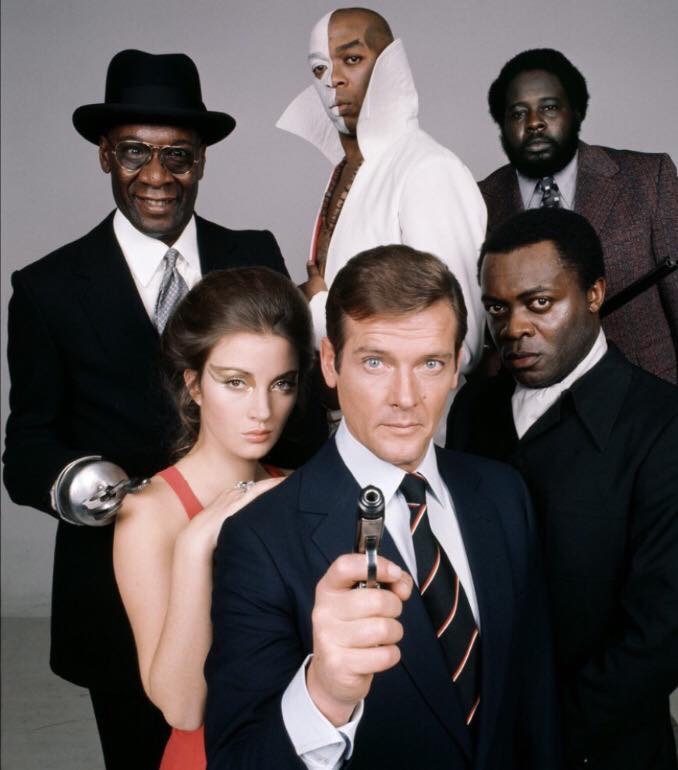 At right, a GREAT cast photo. There’s a LOT going on there, which fits given the lovable mess of a film it’s from, but allow me to point out:

After this auspicious debut, Moore went on to have the longest tenure in the role: a total of 7 films over 12 years. His swan song came in 1985 and is, sadly, is almost certainly the worst of the bunch. By then, Eon Productions was completely out of Fleming books to adapt (with one key exception they wouldn’t touch for 20 years), so I guess it makes a little sense that, in the middle of the 80s, they’d feel fine about a 58-year-old Bond chasing a crazed millionaire (Christopher Walken!) whose aide-de-camp is Grace Fucking Jones. Hey, while we’re at it? Why not a fight on the Eiffel Tower!

Of course, it’s not his fault that the films had veered hard into silliness and camp by that point; he had some great ones — the debut, obviously, but also The Man With The Golden Gun (a prosthetic nipple!), The Spy Who Loved Me (hot Russians! submarine sports cars! the greatest opening scene ever!), and Moonraker, about which more later.

He was a more suave, mature, and sophisticated Bond than Connery or those that came after (though maybe Brosnan’s version was close), and for most people of my generation he was our first exposure to the character — sort of the Tom Baker of the series, really. As noted, Moore’s got the most films and the longest tenure, a record that doesn’t seem likely to fall. Connery did only 6 films to Moore’s 7. Brosnan and Dalton together only account for 6 more. Craig may or may not do a 5th film, but he’ll certainly be done by then.

My first Bond film was Moonraker. I saw it in a drive-in with my dad, in a time when drive-ins were already well on their way out. It was obviously derivative — Star Wars made everyone want to do SF all of a sudden, so Bond-in-space was in some ways inevitable — but it’s held up okay, especially considering that it’s only the second time Eon Productions was “on their own” with no novel to draw from. We got the second coming of Richard Kiel’s 7-foot, steel-toothed Jaws, memorable weightless nookie, and a “Bond girl” whose naughty name (Holly Goodhead) flew entirely over my 9-year-old head. I was obviously smitten immediately, and quickly devoured the back catalog via the newfangled VCR my newly-divorced dad would soon acquire. Impossibly, my Baptist grandmother even bought me some of the books.

Anyway. Godspeed, Roger Moore. I noted not long ago that we’re likely to lose several more Doctor Who actors in the short term. The first three are already gone, and Tom Baker is 83. The same can be said of the Bond men: Lazenby is 77; Connery is 86. Tim Dalton is 71. Brosnan is 64. And we are, all of us, getting older right along with them.

This is pretty great.

Weeks before Chris Cornell died, Rolling Stone interviewed Cameron Crowe about the 25th anniversary of his film Singles and its soundtrack.

The film was shot just a tiny bit before grunge really exploded nationwide. 1991 was kinda ground zero for grunge releases — Nevermind, obviously, but also Mudhoney’s Every Good Boy record, Pearl Jam’s Ten, Soundgarden’s Badmotorfinger, the Temple of the Dog one-off, and others. Alice in Chains’ Dirt came out the next year. But, critically, when they were shooting this film, none of those records were out or successful. Pearl Jam wasn’t even Pearl Jam yet; they’d only just brought in Eddie, and were still called “Mookie Blaylock”.

So anyway: Seattle wasn’t SEATTLE yet, and none of those people were particularly famous. Crowe, living in Seattle and married to a local, was falling in love with the growing scene, which is where the film came from. People who became huge months later appear in the film in tiny parts — Jeff Ament is in Matt Dillon’s band, for example. Alice in Chains and Soundgarden are bands playing in bars. And, as you’ll read in the interview, these folks hung around the production, even when they weren’t working — including Cornell.

Anyway. As part of the arc of the film, Dillon’s character Cliff Poncier loses his girl, his band and goes solo, and as was the custom of the time makes a solo tape to hawk while busking. It was just a prop, but Ament actually designed it, right down to (fictional) song titles and whatnot.

And then something interesting happened; Crowe tells it:

It’s kind of amazing. The idea was that Matt Dillon’s character, Cliff Poncier, in the course of the movie, he loses his band, and he loses his girlfriend, and he gains soul. So, there’s a period where he’s on a street corner busking, having lost his band, but beginning his solo career. And there would be, in reality, these guys standing on the corner outside the clubs in Seattle hawking their solo cassettes. So we wanted Cliff Poncier to have his own solo cassette. And Jeff Ament, in classic style, designed this cassette cover and wrote out these fictitious song names for the cassette.

And Chris Cornell was another guy who was close to us when we were making the record, and still is a good friend. I really loved Soundgarden; they were my favorite band. I originally thought Chris could play the lead, but then I think that turned into too big of a commitment for everybody and so he became the guy he is in the movie, but in the course of making the movie he was close to all of us. He was always around.

Anyway, Jeff Ament had designed this solo cassette which we thought was hilarious because it had all of these cool song titles like “Flutter Girl,” and “Spoonman,” and just like a really true-type “I’ve lost my band, and now I’m a soulful guy – these are my songs now” feeling. So we loved that Jeff had played out the fictitious life of Cliff Poncier. And one night, I stayed home, and Nancy, we were then married, she went out to a club, and she came back home, and she said, “Man, I met this guy, and he was selling solo cassettes, and so I got one for you.” And she hands me the Cliff Poncier cassette. And I was like, “That’s funny, haha.” And then she said, “You should listen to it.” So I put on the cassette. And holy shit, this is Chris Cornell, as Cliff Poncier, recording all of these songs, with lyrics, and total creative vision, and he has recorded the entire fake, solo cassette. And it’s fantastic. And “Seasons” comes on. And you just can’t help but go, “Wow.” This is a guy who we’ve only known in Soundgarden. And of course he’s incredibly creative, but who’s heard him like this? And we got to use “Seasons” on the soundtrack, and Chris did some of the score.

How neat is that?

From the WaPo’s “After Chris Cornell’s death: ‘Only Eddie Vedder is left. Let that sink in.’“, we find this:

Cornell hanged himself in a Detroit hotel room after performing what would become his final show with his band, which he closed by playing “In My Time of Dying” by Led Zeppelin.

Also, yeah, someone please make sure Eddie is okay.

This is kind of adorable and fun.

This short asks, and answers, the question “Has Reservoir Dogs Aged Well?”