Look at this. Just look at it.

You may have heard that we’re sending another probe to Mars.

Once it hits the Martian atmosphere, it takes about 7 minutes for it to reach the surface.

Mars is far enough away, though, that messages from the lander take 14 minutes. Ergo, by the time we hear it’s hit the atmosphere, it’s either safe on the ground or a pile of junk.

How they plan to manage this is a pretty interesting story. Make time for this today. (Here’s a permalink if you miss it today.)

Apple is widely believe to be preparing the next iPhone (and let’s be clear; they won’t call it the iPhone 5 — expect it to be “the New iPhone” just like the 3rd iteration of the iPad was simply “the new iPad”) for release very soon. While they’re notoriously tricksy and secretive, we can divine at least a little information from past behavior and market realities.

Above all, Apple is certain to want at least one if not more than one new product in hand going into the holiday quarter.

Second, we can look at the release dates and “life spans” of the prior iPhone versions:

Third, we can pay attention, just a little, to the rumors circulating now about a September release date.

Many times when we try to read the tea leaves, we get conflicting information.

This is not one of those times:

So, your iPhone is messing up? Battery life sucks? Screen broken? Tough it out. Mrs Heathen’s battery doesn’t last a whole day anymore, and my home button only works about half the time. But neither of us are at all interested in buying a 4S within 60 days of its replacement, and neither should you be.

The former chair of the Florida Republican Party, Jim Greer, stated at a deposition in May that they worked explicitly to suppress the black vote.

In Soviet Russia, you FEED FOX!

Kiese Laymon on How to Slowly Kill Yourself and Others in America: A Remembrance.

The bad news is that, apparently, they’re rebooting The Munsters in 2013.

The good news, and the bit that may make it watchable, is that they’ve tapped the Pushing Daisies guy to do it.

Houston is getting a local bourbon distiller.

Once again, some pix.

CalTech has turned itself in to the NCAA for cheating. You may be confused by this. I know I am.

Google is starting its fiber rollout; the initial neighborhoods in Kansas City will have the option of a ONE GIGABIT CONNECTION — both ways.

Existing telcos in whatever markets Google identifies are, I’m sure, absolutely shitting their pants. And should be.

It’s possible some of you aren’t nerdy enough to realize how big a deal this is. When I say “a gigabit connection,” I mean a connection that delivers 1 gigabit of bandwith per second. A gigabit is 1,000 megabits. A megabit is 1,000 kilobits.

Initial DSL connections were usually in the 400 to 600 kilobit range for download speeds. Now it’s usually 1 to 3 megabit download and about 0.7 megabit upload, unless you pay extra. Here at Heathen Central, we buy the fattest pipe UVerse will sell us, which is theoretically 18 megabits down and 3 up. In practice, it’s more like 12 to 15 down and 2 up, but that’s normal.

1,000 megabit both ways? Shit yes. Sign me. ATT can fuck off as soon as I get my hands on that, for sure. I mean, Google may be trending towards evil, but AT&T is the goddamn phone company. How much more evil can you be?

Chuy’s is now a public company.

Mike breaks down TV On the Radio for you.

This is Mrs Heathen: 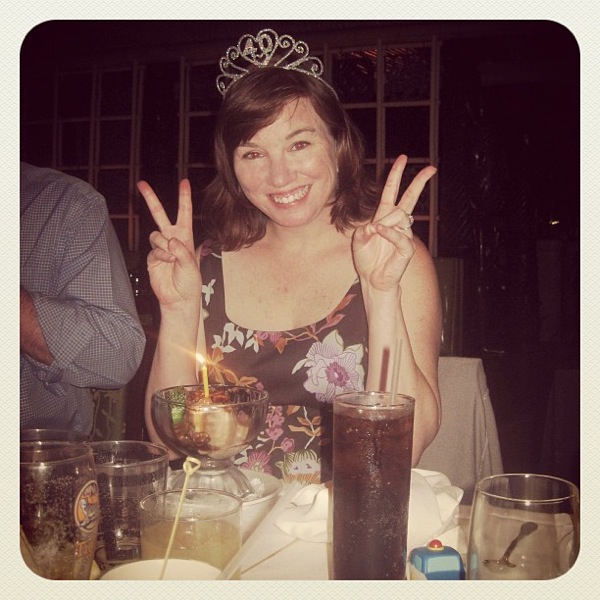 It is her birthday. She is impossibly awesome. Behave accordingly.

This two-volume, slipcased omnibus edition of 9 classic SF novels is significantly more affordable than the last object of booklust I mentioned…

“Just days after a poacher’s snare had killed one of their own, two young mountain gorillas worked together Tuesday to find and destroy traps in their Rwandan forest home.”

Back in the 60s, apparently, Jack Kirby did some theater costume designs for UC Santa Cruz. For a Shakespeare play.

No, not Mountain Lion, though that’s kinda important, too. (Official Heathen rec: As with all major upgrades, wait 3-6 months.)

I mean the all-important question of “what virtualization platform to use?” Since the Mac platform migrated to Intel chips, it’s been possible to run Windows in a window at near-native speeds — I do it all day, even running SQL Server and IIS locally, with completely acceptable performance.

Now, your needs probably aren’t my needs, but few are the Mac folks who don’t have at least one Windows holdout program they can’t quite get rid of. (For my mom, it’s Quicken, for example.)

Up to now, the go-to options for non-techie types were VMWare Fusion, from a company that made its name on server-side virtualization in high-availability environments, and something called Parallels (no link; keep reading for why) from a company that just does Mac desktop virtualization. For me, that choice has always been pretty simple: Go with the guys who do this for a living on lots of levels. They know more.

Historically, Parallels has performed pretty well, too, and in some areas was actually better than Fusion (mostly graphics, which doesn’t matter to me). I generally gave no recommendation to folks beyond “pick whichever of these is on sale.”

That’s no longer true. Parallels, apparently, actively spams its users with in-app advertisements and sales pitches, and makes it very difficult to turn this off, even to the point of deleting messages on their support forums sharing the command line (!) required to do so.

Their statement on the subject is a cornucopia of weasel-words and bullshit:

We use in-product notifications to share several types of information with our customers. First, and most importantly, we share information about product updates which are generally related to compatibility with OS X, new features and product enhancements. Second, we occasionally share special offers from Parallels or other third party companies who provide special deals for our customers. Many of our customers rely on the information about product updates and appreciate the special deals for products that are of interest to them.

Individual notifications can be turned off by clicking the “don’t show this again” button. However, because customers need to receive important product information, there is not a mechanism for customers to completely disable notifications.

This, of course, is a lie; there IS a terminal command you can issue to disable it. That line is:

Parallels isn’t shareware or freeware. It costs real money — typically about the same as Fusion, which is nearly a hundred bucks. It’s absolutely inexcusable that they’re insisting on this spamming behavior, and doubling down by (first) lying about the fact that it CAN be disabled and (second) trying to keep people from discovering this truth.

Do not buy Parallels. Send your dollars to VMWare. They’ve had plenty of time to address this; it’s clear this behavior is deliberate, and that they have no intentions of changing. Vote with your money.

Why does the IT industry continue to listen to Gartner? Same goes for Forrester and, in my experience, pretty much all the rest of those “analysis” firms. They’re almost never right. They miss big trends. You’d be better off asking my grandmother, and she’s been dead since 2001.

Randall Munroe’s What If? tackles the question of “What would happen if you gathered a mole of moles?”

In this great behind-the-scenes short from the Hobbit, I discovered that Sylvester McCoy is in the film as Radagast, another of the wizards, i.e. a peer of Gandalf.

McCoy is of course already immortal in fandom as the 7th incarnation of the Doctor back in the 80s; his tenure — the 24th, 25th, and 26th seasons — closed out the original TV series, though he went on to do a TV movie in 1996.

(Giant Nerd Alert: Note that, in Tolkein, wizards are not human beings. They’re closer to angels or demigods.) 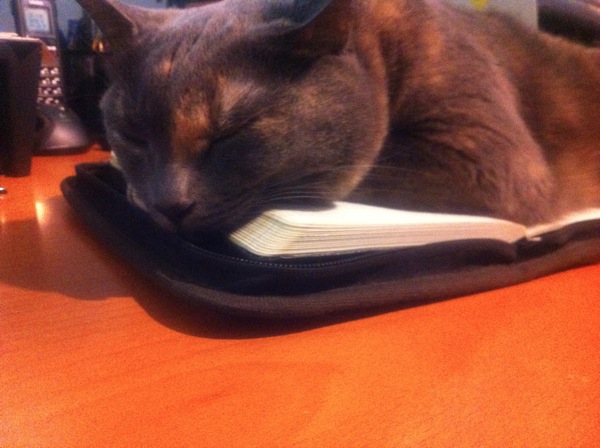 On Sunday, Briton Bradley Wiggins became the first person from the UK to win the Tour de France. It was pretty cool.

Also cool: Part 2 of the Atlantic’s InFocus feature on the Tour, which includes the answer to the question nagging every Tour fan this year: where was the devil?

You just can’t make this stuff up: 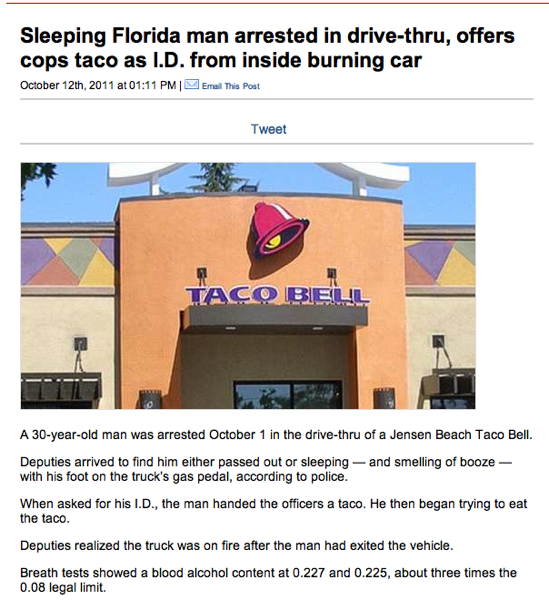 Apparently, a judge has ruled that it’s legal for cops to use your phone to impersonate you if the seize it, and that messages that come into the phone after its been seized are no longer worthy of Constitutional protection.

I for one am shocked — shocked! — to learn that the Border Patrol behaves like this.

Again, the only that that will produce greater accountability in law enforcement is civil and criminal liability for the actual officers. The problem with CBP is even bigger, since their victims are essentially powerless, which has clearly led to a situation where they feel they can get away with anything they want — with predictable consequences.

I grew up cringing every time somebody or something from where I lived made national news. I’m therefore delighted to be so proud of my city and our mayor, who was on the Colbert Report last night.

The glorious book nerds at The Folio Society have issued a new edition of Faulkner’s The Sound and the Fury, printed as Faulkner wished — with multiple colors denoting the time and point-of-view shifts.

It is $345, in slipcover, on archival paper, with a commentary volume, and I WANTS IT.

So it goes: the only decent music station on Houston’s FM dial, 103.7, is switching to a Christian format.

File under “The Westeros 1% In Street Clothes:”

I recently re-read this fantastic piece from the Houston Press, which ran originally back in 2006. Ever since then, I’ve kinda wanted to do my own stroll down the length of Westheimer — though I doubt I’d have as much fun at it as Lomax and Mueller. Who’s with me?

You know, I really DID miss the sorts of storms that we’ve been enjoying the last week or so, but I really don’t need them to be so dramatic as to zap my power.

On the other hand, this is the first power outage of measurable length — 35 minutes and counting — that I remember since Ike back in 2008. Let’s hope this one doesn’t go for 4 day.

Also? All hail iPads with keyboards and 3G.

Diana Rigg is joining the cast of Game of Thrones.

The Atlantic’s InFocus this week is all shots of the Tour de France so far. Picture #27 is especially lovely.

How many rubber bands are required to make a watermelon explode?

Yeah, me too. This Reddit post actually does a pretty bang-up job of explaining how barter, currency-as-marker-for-something-else, and modern fiat money all work.

Like, maybe, 70 years ago? Yeah, well, somebody found it.

Mr Tom Waits was on Letterman last night. Click in the bar to skip to about minute 32 to start with the interview, or minute 38 for just the performance.

Waits will be on Fallon tonight. Plan your evening accordingly.

Perhaps you’ll be delighted to hear that Chris Onstad has been doing some food and travel writing.

No, not the private sector one. The one that beat us to orbit.

The monument pictured is much more striking in person, which is sort of amazing given how cool the pictures are. I saw it in 1991.

Here’s the widely linked video of an employee of the Chicago Music Exchange playing 100 rock riffs chronologically in one take, which is entertaining in its own right, but real music nerds will notice that the truly impressive bit is that he retunes on the fly a couple times.