In which I answer the hypothetical question “how was your weekend?”

Yeah, it’s a thing. The event is the Hotter’n Hell Hundred up in Wichita Falls, Texas. It’s the largest organized century ride in the country. People come from all over — I rode with folks from Missouri, Colorado, etc. It’s a Big Deal in the cycling world, with at least some bragging rights associated & whatnot.

In which I explain, in part, how this came to be.

Turns out, I have a really, really great cycling team (Karbach Brewing), and a group of them were going and — more to the point — knew how to do this right. There were rented RVs, plenty of pop-up shade tents, and (crucially) folks to ride with. We ended up with maybe 26 or 28 folks there.

All I had to do was register, show up, and pay my share of the RV rental.

Oh, and train for the other two events AND the century.

In which the “Triple Threat” is explained 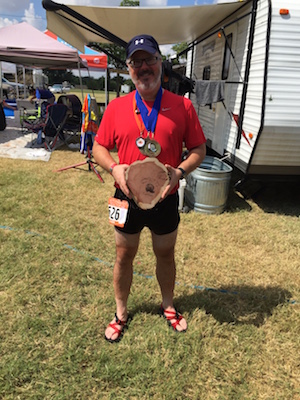 I figured “hey, if I’m going all the way to Wichita Falls, may as well go full monty.” And the Full Monty at Hotter’n Hell is something called the Triple Threat.

Complete the Triple Threat, and you get one hell of a trophy. I wanted that trophy. See pic.

At least I didn’t go middle-aged crazy and buy a sports car or something.

This explains where you’ve been all summer

Right. I ride about 100 miles a week anyway, but I had to fold in some mountain biking AND enough running/jogging to complete the half. This made for a busy summer.

Dept. of Credit Where Credit Is Due

I never would have gotten this done without three big factors.

Comfort on the Frontier

It didn’t hurt that our camp/compound included air-conditioned RVs, a huge covered area, a pool, and an inflatable movie screen. 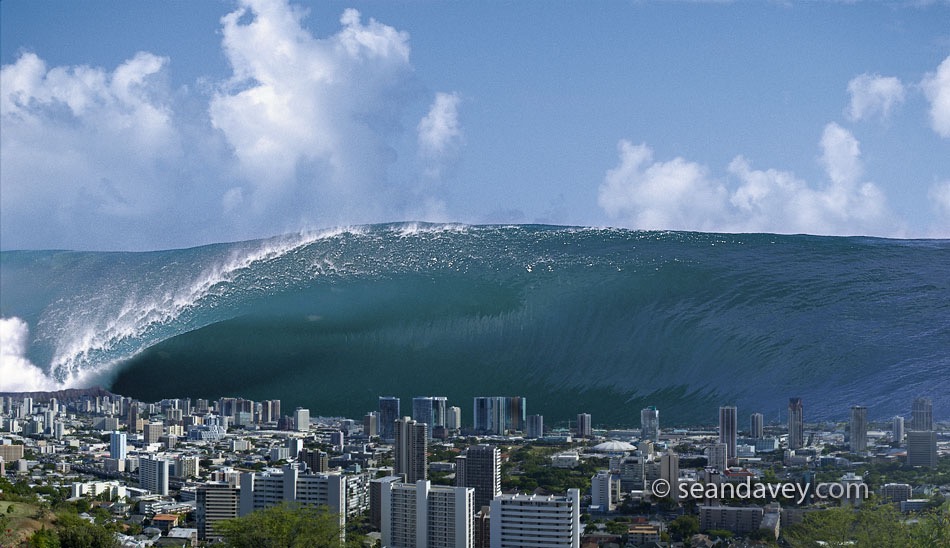 “Do not store important items downhill from the inflatable pool.”

Unlike in Houston, where the water would set up housekeeping and create a new wetland complete with Zika-laden mosquitos, crawfish, and possibly alligators, up there the water just DISAPPEARS. It’s witchcraft, I tell you.

(This will be important later.)

In which OU fans are adorable

One day, the pool water turned red. No idea why; we assumed it was something to do with the chlorine tablet. Only later did we discover that some, um, less observant OU fans camped nearby had seen ONE guy in a UT hat, assumed we were all UT/Austin people, and dumped food coloring in the pool. The joke was COMPLETELY lost on this Houston-based, diversely-educated crowd until the OU folks came by to try and figure out why their joke had gone flat. Oh, Sooners; you’re adorable.

In which we encounter terrible food on Thursday, Pt 1

At lunch, we were faced with the following question: What terrible sequence of life choices could result in being a Wendy’s loyalty card holder?

In which we encounter terrible food on Thursday, Pt 2

That the Tex-Mex restaurant we ate at on Thursday night did not have margaritas, but did serve both frito pie and chicken fried steak, is pretty much all the evidence required to prove that, at least morally, Wichita Falls is best understood as part of Oklahoma.

The route on the Hundred did in fact take us perilously close to Oklahoma: 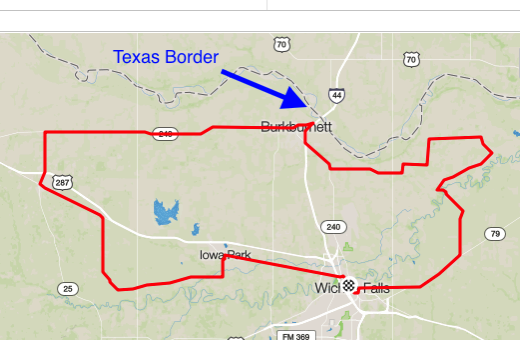 Said Tex-Mex joint proudly displayed its local awards for “best chips and salsa” from three consecutive and recent years. The chips were clearly Tostitos, and the salsa was obviously Pace.

It is, apparently, impossible. But it takes half an hour to explain why.

It is possible that “has a grill” is not a sufficiently unique key.

I forget the answer, but this is a fine question to overhear while drinking beer.

“Hey Dean, where’d you dive with all them barracudas?”

To Hell With Context, Pt. 1

In which we re-assert findings first published this summer

Mountain bike racing is hard, yo.

Was it made harder by folks who will not get out of your way, and thus force you to walk up berms you’re pretty sure you could ride up otherwise?

Absolutely fine, since she is a cat 3 road racer young enough to be my daughter.

Would I do the MTB race again?

Shockingly, I found the HTH to be easily the least miserable century I’ve ever ridden.

So was it, in fact, Hotter’n Hell?

If you’re from Colorado, I’m sure mid-90s to 100s in Wichita Falls is trouble for you.

I am from Houston. The general lack of humidity made the temps much, much more managable vs. the weather we train in down here. Drink enough water and you’re fine.

Also, of course, we were kinda sandbagging given the Looming Awfulness of Sunday’s task.

What sucked more than heat

CHIPSEAL ROADS. Holy crap, that stuff will shake you to pieces, and the vibration makes the ride much more fatiguing. Fortunately, no more than 85-90 miles of the century were on chipseal.

A brief digression about bicycle design as relates to crappy roads

There’s no reason for you to know this, but the model of bike I ride is a Specialized Roubaix. It’s named “Roubaix” after a particularly grueling race (the Paris-Roubaix) that is ridden on streets made of cobblestones. Cobblestones are awful to ride on — treacherous, yes, but also bumpy as hell. Super-stiff race bikes make it worse, so Specialized developed a bike designed to be quick and compliant while also providing a bit of insulation from bad road conditions.

That I was unhappy even on this bike should give you some idea how delightful my colleagues on racier, stiffer bikes found the roads.

Remember that thing about disappearing water?

In Houston, when you ride in the heat, you just get sweaty, and the sweat doesn’t go anywhere. It just sits in your clothes like an ambulatory lukewarm bath.

In Wichita Falls, when you ride in the heat, you still sweat, but the sweat evaporates, and thereby provides evaporative cooling. I am told that scientists believe this is the reason we sweat, but as a lifelong swamp dweller I am unable to confirm this hypothesis.

I can tell you, however, that it’s damn strange to get back on your bike after fixing a flat and discover that the resulting wind, sweat, and evaporation combination is making you cold despite an ambient air temp of 95+.

Would I do the Hundred again?

Oh, sure. I know it sounds bananas, but riding 100 miles is something I know I can do. I’ve done it lots, and the conditions in Wichita Falls aren’t bad if you factor out the chipseal.

Evidence of our Rock-and-Roll Cycling Lifestyle

After the century, pretty much everyone in the camp was asleep by 8:30PM.

To Hell With Context, Pt. 2

“When I say house wine, I mean Jaeger.”

Thoughts on rising early to run a damn half marathon

“I have fallen in with a bad crowd, and they are making me do dumb things.” 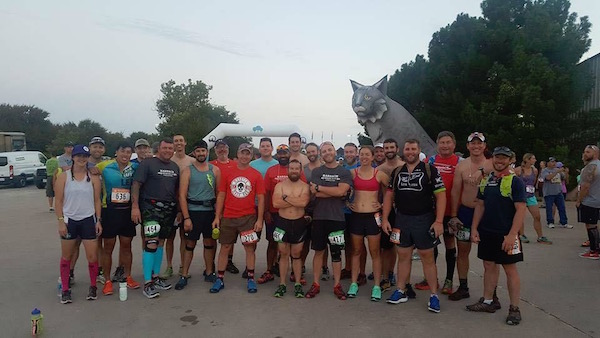 But you did it anyway, right?

A fun thing to note that is, nevertheless, statistically questionable

“This was may fastest half marathon EVER!”

A sad note regarding our podcast empire

“Chet and Mike’s Nature Hike Spectacular” turned out to be an idea better honored in creation than execution.

Hand him a can of his favorite beer as he crosses the finish line, but make sure there’s no more than an inch of beer left in it.

All that said, I think I’ll retire the shorts.

Can you blame me? 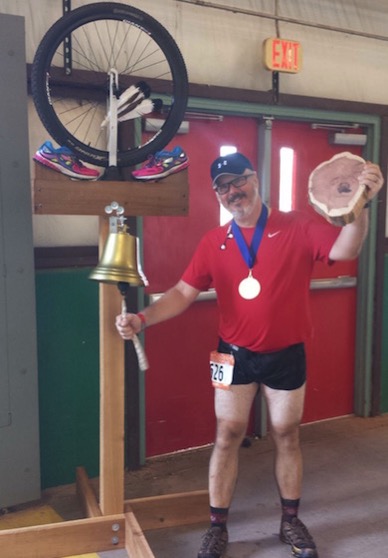 This is a pretty great rundown of the history of continuity changes in the DC comics universe.

Non-nerds may wonder what that sentence means, so I’ll take a swing at a quickie explanation. “Continuity” in superhero comics refers to the overarching story. Each issue isn’t self-contained; they reference prior issues, and not just last month’s. Batman remembers fighting the Joker a year ago and ten years ago, and so forth. He knows he’s been friends with Superman for much of his life. These are just facts in the DC world.

Of course, then you have a problem, because both of those heroes started fighting crime nearly eight decades ago, and yet both are frozen in the prime of life despite having literally decades of experience in their roles — and the storytelling burden of a new issue every month.

(It’s worth nothing that the only other form of storytelling that deals with such long-term continuously published continuity is the soap opera, but there, at least, you’re tied to reality because the actors age in real time.)

First, there’s something called a “ret-con,” which is short for “retroactive continuity.” When this happens, some prior fact in a story is changed, but without upending the whole world. Minor retcons happen all the time; a great “mainstream” example is flashbacks in The Simpsons, since they’re frozen in time in a 20+ year show. When the show started, a memory sequence from 20 years before would unequivocally place Homer in the 1970s, but more modern episodes shift his earlier life forward, right? That’s the kind of retcon.

The other one is the reboot, where massive amounts of prior story and history is jettisoned in favor of a blank-slate renewal with only certain base facts retained. That’s what the linked story is about. DC — the comics company behind Superman and Batman — started in the 1930s, and told stories of a bunch of heroes in addition to Superman, Batman, and Wonder Woman. But in the postwar years, interest in hero comics cratered and nearly all those hero titles (except the big three) were cancelled until a revival in the 1950s. The revival, though, fundamentally changed many of the characters — the original Flash wore a tin hat, for example, but the version resurrected in the 1950s is the one you probably think of when someone says “The Flash”; he’s Barry Allen in a red suit with a cowl and a lightning motif. (In comics, the original era is referred to as the Golden Age, and the 1950s revival is the Silver Age.)

Another excellent example of a reboot is what Abrams did with the 2009 Star Trek film. We see the same characters, and the same ship, but we’re telling new stories with them. The Chris Pine version of Kirk has never met Harvey Mudd, never seen a tribble, and so forth. The inclusion of “regular” Spock in the film gives us a link to the “normal” Trek universe, but it’s otherwise distinct, with its own threads of story and history to unfold, unencumbered by any of the history that’s been piling up since the original series aired.

Anyway, the storytelling problems that surface in comics are unique to the form (though kin to those faced by any long-running narrative universe, including soaps and certain long-running franchises like Star Trek and Doctor Who). This article is a fun exploration of how DC has addressed them in the last eighty years.