This is close to home. People are literally going to the black market to get insulin because their insurance won’t cover it.

Fourth grader Gabriella Corley is trapped. She has type-1 diabetes and is allergic to the kind of insulin her insurer makes affordable — and her family can’t pay for the kind she needs every day to stay alive.

“Why did I even build this?“

A note from the new CEO of Lobstero.

A Chicago man is suing Bose, alleging his wireless, noise-canceling headphones are also sending information about his listening habits to a Bose partner called Segment.io via the companion smartphone app.

This kind of thing is simple to check, so it’s virtually certain that the allegation is true (especially since the man has engaged a respected law firm).

There remains no easy way for consumers to control phone-home behavior from apps or “internet of things” devices, because it’s all too new. Nerds like me can do it, but it’s still not simple, and it should be. In computer security, folks often try to pare down any given user or process’ permissions to the barest minimum required to do the task at hand; if more folks were able to apply that to bullshit like headphone companion apps and smart light switches, we’d all be better off.

Of course, the other takeaway is this: your fucking headphones shouldn’t need a goddamn app. That’s absurd. If you find your headphones have come with an app, RETURN THEM, because something dodgy is probably going on.

Mrs Heathen and I are suckers for prestige TV, and I love gangsters, so we dove into Boardwalk Empire when it started. Unfortunately, it just didn’t hold us after the 2nd season — and frankly, we stayed longer than we might’ve otherwise, in part because of the incredible charisma that Jack Huston imparted to the tragic, disfigured Richard Harrow. 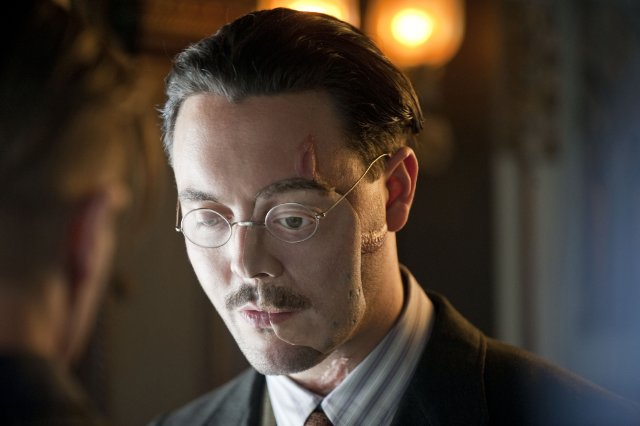 The show concerned organized crime in Atlantic City in the years between World War I and the end of prohibition, more or less. The central character, played by Steve Buscemi, was based on a real person, though obviously they took liberties. Michael Pitt appeared as Jimmy Darmody, young man who’d run off to war and come back physically whole, but mentally shattered.

Darmody befriends Harrow, and introduces him to the criminal underworld of Atlantic City — a role that, as it turns out, Harrow takes to like a duck to water.

Anyway: it’s through Harrow that I first learned that, after the war, many who had facially disfiguring injuries were fitted with tin masks molded and painted to resemble their prewar faces.

Here’s how Harrow enters the show:

This morning, I was reminded of the show generally by this excellent photoset over at the Atlantic. Pay close attention to number 33.