This backgrounder over at Talking Points Memo is extremely informative. I had a vague sense that Wilson was a jackass, but until now I didn’t appreciate what a complete and utter shitbag he was.

He ultimately taught at Princeton, where he made his mark with a compact textbook, “Division and Reunion,” about the Civil War and postwar reconciliation. Contained within was an outline of the post-Confederate vision of a nation reunited based on shared Anglo-Saxon interests. He declared the “charges of moral guilt” leveled against Southern slave lords were unjust because slaves “were almost uniformly dealt with indulgently and even affectionately by their masters,” who themselves were the beneficiaries of “the sensibility and breeding of entitlement.” He condemned Reconstruction — the effort to enforce the civil and political emancipation of African-Americans in the occupied South — and said allowing Blacks to vote was a “carnival of public crime.”

In his follow-up effort, a “poorly written and shoddily researched five-volume tome” called A History of the American People, he

furthered the white supremacist arguments in “Division and Reunion,” calling freed slaves “dupes” and the KKK a group formed “for the mere pleasure of association [and] private amusement” whose members accidentally discovered they could create “comic fear” in the Blacks they descended on. Immigrants were a problem because they were no longer “of the sturdy stocks of the North of Europe” but contained “multitudes of men of the lowest classes from the South of Italy and men of the meaner sort out of Hungary and Poland” and Chinese people, “with their yellow skin and strange, debasing habits of life,” who seemed “hardly fellow men at all, but evil spirits” and who provoked understandable mass killings by white mobs.

Once elected president — which, we should note, really only happened because of a 3-way split of the electorate, as he took office having only captured 42 percent of the vote — he made his priorities clear:

Wilson presided over the segregation of the federal government, with Black civil servants directed to use only certain bathrooms and to eat their lunches there too so as to not sully the cafeterias. At the Bureau of Engraving and Printing, makeshift partitions were erected in offices so white clerks would not have to see their Black counterparts.

The new bill, called the Lawful Access to Encrypted Data Act, essentially outlaws end to end encryption that does not feature a back door, which means it outlaws any secure encryption at all.

It is not possible to create a secure encryption scheme that includes a back door. The existence of the back door means the existence of some sort of master key that will inevitably be leaked and misused. Insisting “but we’ll require a warrant” is cold comfort in light of that, and never mind that the whole warrant process for surveillance has been shown repeatedly to be rife with abuse itself.

This isn’t just about encrypted communication in WhatsApp. This touches every financial transaction online — every payroll deposit, every mortgage payment, every credit card charge. All of these things use secure encryption. And all of them will be made materially weaker and far, far easy to compromise by this bill.

Ars lays it out:

In recent years, large cloud providers such as Amazon, Microsoft, and Google have made big and successful pushes to convince large businesses to host increasingly confidential business data in their data centers. This is only feasible because of secure encryption using keys inaccessible to the cloud provider itself. Without provider-opaque encryption, those businesses would return to storing critically confidential data only in self-managed and controlled private data centers—increasing cost and decreasing scalability for those businesses.

This, of course, only scratches the surface of the true impact of such a misguided effort. Secure encryption is an already widely available technology, and it doesn’t require massive infrastructure to implement. There is no reason to assume that the very terrorists Graham, Cotton, and Blackburn invoke wouldn’t simply revert to privately managed software without holes poked in it were such a bill to pass.

There’s also no reason to assume that the service providers themselves would be the only ones able to access the critical loopholes LAEDA would require. It’s difficult to imagine that such vulnerabilities would not rapidly become widely known and be exploited by garden-variety criminals, foreign and domestic business espionage units, and foreign nations.

The advocacy group Fight for the Future issued the following statement (also in the Ars article):

Politicians who don’t understand how technology works need to stop introducing legislation like this. It’s embarrassing at this point. Encryption protects our hospitals, airports, and the water treatment facilities our children drink from. Security experts have warned over and over again that weakening encryption or installing back doors will make everyone less safe, not more safe. Full stop. Lawmakers need to reject the Lawful Access to Encrypted Data act along with the EARN IT act. These bills would enable mass government surveillance while doing nothing to make children, or anyone else, any safer.

What Do the Hohenzollerns Deserve?

Apparently, the German royal family — deposed since 1918 — are trying to rewrite history, and perhaps regain a place of honor on Germany, including compensation for land and palaces in Berlin taken from them after abdication (which would come in addition to the dynastic wealth they retained even after 1918).

This is ridiculous, and would be ridiculous even without clear evidence of his family’s collaboration with and support of Hitler.

Monarchies are all based on murder, mayhem, and corruption. Monarchal wealth that persists past the end of the governing monarchy ought to have been subject to state confiscation. It’s ridiculous that the Hohenzollern descendants are still wealthy layabouts and not normal citizens with a historical footnote in their family tree.

Fortunately, it appears most Germans agree:

Many Germans are bewildered by their former royal family’s demands. “This country does not owe a single coffee cup to the next-born of a luckily long-vanquished undemocratic regime, let alone art treasures or real estate,” wrote Stefan Kuzmany, a columnist for Der Spiegel. “Even the request is an insult to the Republic.” The Hohenzollern wealth, he argued, was the product of historical injustice: “The aristocracy in general, [and] the Hohenzollerns in particular, have always been a plague on the country and the people. Like all so-called noblemen, they have snatched their fortune through the oppression of the population.” As Clark noted in his interview, “There seems to be a strong animus against the nobility within parts of the German public.”

Why we must reopen.

No, seriously, Do NOT use the popcorn button.

Hilton Als, writing in the New Yorker this week, will absolutely blow you away. Make time.

You don’t know the name, do you? Well, he wrote True Grit, which has now been a film twice: once, as a vehicle for John Wayne, and then again 10 years ago by the Coens. The latter is far superior, probably for hewing much closer to the novel.

Also, Jeff Bridges is a far better actor than John “One Note” Wayne.

Nick Cave’s October show in Austin? Dead due to COVID. 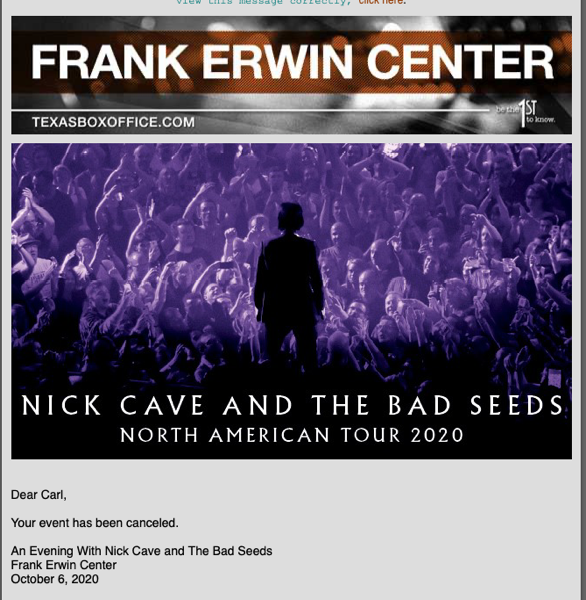 45 years ago today, Dock Ellis pitched a no-hitter while on acid.

Well, you MIGHT know him — he wrote a book called Miami Blues that was made into a tight little hardboiled comedy in 1990 with Jennifer Jason Leigh, Fred Ward, and a 32-year-old Alec Baldwin. But you probably don’t.

But you should. Here’s a great intro from over at CrimeReads, which includes this spectacular sequence:

Although he was writing fiction, Willeford believed in doing his homework to make the story believable. He spent two years learning everything he could about the sport of cockfighting before he wrote his 1962 novel Cockfighter. Hard-boiled fiction is known for its terse heroes, but the hero of Cockfighter, Frank Mansfield, tops them all. He vows not to speak to anyone until he wins the big championship.

Cockfighter was going to be Willeford’s big breakthrough novel. But shortly after it was published, his publisher died and the publishing house went bankrupt. As a result, most of the print run, more than 20,000 copies, never reached bookstores.

Later, in 1974, Roger Corman produced a movie version directed by Monte Hellman and starring a masterful Warren Oates as Mansfield and Harry Dean Stanton as his nemesis. Willeford wrote the screenplay and had a cameo as a ring official. Corman said that it was his only film that lost money, despite the movie’s legendary tagline: “He came to town with his cock in his hand, and what he did with it was illegal in 49 states.”

Anyway, there’s a new Willeford film coming — or, rather, it’s out, but in these COVID days lots of small films are getting lost. It’s called The Burnt Orange Heresy, based on his 1971 novel of the same name, and it premiered at last fall’s Venice Film Festival. Per the linked story, “A Variety review calls it ‘a marble-cool art-fraud thriller.'” Bonus: if you enjoyed the BBC/Netflix adaptation of Dracula earlier this year, you’ll be pleased to find that Claes Bang appears here in a leading role.

You can read more in this thread. And you should.

I’ll be up front and say that I do not love The National like this author, but I am entirely familiar with the sort of distracting and potentially unseemly love one may develop for a band that hits you where you live at just the right moment. Feeling that way about music is a magical gift; it opens doors to friendships and relationships and experiences that are inaccessible any other way.

So yeah, even if The National — whom I do enjoy — have never been that band for ME, I absolutely understand what Helena Fitzgerald is talking about here.

Oh, and while you’re at it? Here’s a great interview with frontman Matt Berninger you may enjoy, too.

And I’m listening to The National a bit more, anyway. Hey, nothing but time, right?

And the War on Drugs was always and only a racist pursuit founded by, of course, Nixon.

Zelda Perkins met her hero. It was awesome.

The Police are the Problem

This week, we’ve watched countless peaceful marches descend into violence, but the striking thing is this: The violence has been overwhelmingly initiated and escalated by the police, not by the protesters. Standard operations procedure appears to involve kettling the protesters just before curfew, then refusing the let them leave and tear-gassing them, and then arresting and detaining as many as they can. After arrest they’re left to suffer in hot, unventilated spaces for hours with their arms bound, no access to bathrooms or water, with no explanation for their detention.

Police do this because they know no crime has been committed, so no charges will hold up in court— and so they mete out justice on their terms. It’s the maxim “you can beat the rap, but you can’t beat the ride” writ large, which is itself evidence of broken and corrupt policing. A cop can arrest you for any old trumped up bullshit, rough you up on the way to jail, and hold you for a day on nothing just because he wants to, and you’d need to be very rich or very connected for the cop to suffer any consequences for this thuggish behavior.

So in that context, read this editorial.

Like the author of this piece, I have never stopped loving this old SNL skit about Maya Angelou’s prank show.

We need laughs these days, do we not?