*”The tree of nonsense is watered with error, and from its branches swing the pumpkins of disaster.”* – N. Harkaway

So, for 8 years, the Republicans have defined themselves by nothing so much as their foursquare opposition to the Affordable Care Act.

Their opposition was never rooted in the actual policy choices of the bill. They’ve been very clear about that; their problem was always that it was Obama’s bill. (This is also the reason many progressives were disappointed with the bill, since it was crafted from the get-go to be at least marginally palatable to conservatives — you almost certainly recall that it was patterned on a successful plan implemented in Massachusetts by then-governor Mitt Romney.)

Over and over they voted to repeal it wholesale, secure in the knowledge that such a repeal would be unlikely to reach Obama’s desk, and that even if it did, he’d veto it, and that they didn’t have the votes for an override. It was political theater, with no regard for meaning or consequence because it was divorced from either notion by design.

Except the know-nothing base, cultivated over the years by the extreme elements of the party, actually became convinced that Obamacare was bad law. One may quibble with the specifics — it’s certainly not perfect, and certainly needs to evolve — but what isn’t debatable is that it (a) saves money and (b) results in a net increase in people covered by insurance. These are, normally speaking, good things.

Come November, of course, these particular dogs caught this particular car. And now they had a problem: they’ve been telling their idiot base that their first priority was to repeal this terrible, liberty-killing law for the better part of a decade, and that’s exactly what their base expects now (unaware, as they are, that such a repeal will disproportionately harm the working-class whites who make up that base). And now, with control of both houses and the presidency, they had to actually DO it.

Well, turns out, a party devoted almost entirely to watering the tree of error can produce almost nothing of consequence beyond Harkaway’s pumpkins of disaster. The raving nutbird looney portion of the party set its sights on not just repealing the ACA, but also on gutting other existing health care programs (again, because FREEDOM), and dug in their heels against an insufficiently awful bill. The moderates in the party, vulnerable at home to less-stupid constituents, understood that a bill responsible for actual, measurable harm would be a career-limiting move. The GOP, once famous for party discipline, can’t pass their own bill fulfilling one of their key promises of the Obama years.

Their failure here is an unalloyed good for America as a whole, though I wouldn’t look to this incredibly mean-spirited party to stop trying to fuck people over any time soon. More good news is something that analysts on both sides of the aisle have known for years: the longer we have the ACA, the more entrenched it will become, and the harder it will be to roll back.

What would be really neat, though fantastically unlikely, would be if the GOP could evaluate the actual ACA, figure out — based on empirical facts, not ideology — what’s working and what isn’t, and work together with the Democrats to improve it. That’s how Congress is supposed to work. But with this GOP — one that enthusiastically embraced Trump and white nationalism in the last year — that is of course entirely too much to hope for.

The father of The Gong Show and subject of Confessions of the Dangerous Mind died yesterday at 87.

It is difficult to adequately explain what a treasure The Gong Show was in its heyday. It was weird and subversive and downright bizarre in a media landscape that, in some markets, had Hee Haw on every other damn channel at 6:30 in the evening. Witness bits like the debut of Oingo Boingo, or the whole IDEA of Gene Gene the Dancing Machine, or inspired stunts like this — a show in which every contestant sang “Feelings.”

So I finally got to the tab I opened the other day about Bill Paxton, which reminded me of his short-lived New Wave band Martini Ranch, and their two videos, which support my long-held view that all the cool famous people know each other and hang out together.

Martini Ranch was a pair: Paxton was collaborating with the band’s founder, Andrew Todd Rosenthal, and sounded nothing if not period-correct in 1982. Given that it was the 80s, OBVIOUSLY there are music videos — though, sadly, the count is two. Both date from the late 1980s, and boast casts and crew

The first clip was for the improbably named “How Can The Laboring Man Find Time For Self Culture“, and looks and sounds like someone put Metropolis and Devo in a blender. And here’s where the connections start, too, because the cast for the video includes Paxton and some pals of his: Anthony Michael Hall (with whom he’d starred in Weird Science) in 1985, plus Lords of Discipline (1983) cronies Rick Rossovich, Judge Reinhold, and Michael Biehn — the latter, of course, also with Paxton in Aliens in 1986.

The second video, for a song called “Reach“, was more high concept: a bank robber (Paxton) rolls into a post-apoc western-esque town, pursued by a cadre of improbably attractive female bounty hunters. Where it gets connect-the-dots fun, though, is in the cast and crew.

First, it was directed by James Cameron. Sure, it was only about 1988, but by then he already had a couple directorial successes under his belt (Terminator and Aliens, with Abyss probably already in production); he’s shooting this because they’re pals. Cameron would go on to cast Paxton in 5 films (the first Terminator, Aliens, True Lies, Titanic, and Ghosts of the Abyss), which is more than any other actor. (Cameron’s 4-time club includes Lance Henriksen and Biehn, though the latter got the better deal, as I’m not sure “Piranha II: The Spawning” should be seen as the pinnacle of Cameron’s work.)

Second, the lead bounty hunter is Cameron’s future (and now ex-) wife Kathryn Bigelow, who was also using Paxton in her Near Dark around the same time (1987).

Paxton’s band of outlaws is especially delightful: it includes colleagues from Aliens and Near Dark (Henriksen and Jenette “Vasquez” Goldstein were in both films; the video also includes Paul Reiser from Aliens and Adrian Pasdar from Near Dark) — plus Reinhold makes a return appearance.

Rounding out this delightful crowd is a near-unrecognizable Bud Cort from Harold and Maude, who polishes Paxton’s bike.

The final note is that I’d totally forgotten Pasdar was in Near Dark, and now I can’t remember if he managed to be on Agents of SHIELD at the same time as Paxton as well.

TL;DR? It’s neat to see all this repeat work, even in obscure music videos. 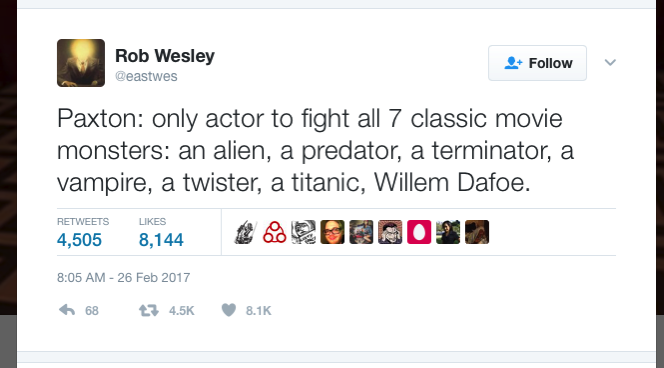