From this NYT interview:

Has your relationship with your penis changed?

I’m curious how your tour is going. You have a new album, “Aprés,” and you’re out there with the Stooges. You resolved in 2010 that you wouldn’t stage-dive anymore after you had a mishap.

I said that after doing a concert for Tibet at Carnegie Hall, which I did because Philip Glass asked me to. [Emph. added — Heathen] But yeah, I am a little impulsive, and Lenny Kaye was playing “I Want to Be Your Dog” too damned slow, and I just ran out of ideas and I thought, Well, let’s just stage-dive. Nobody caught me, because it was the Carnegie Hall-Tibetan-whatever audience. I was a little miffed. We’ve done two gigs this year, and I haven’t done one yet. Stages are getting higher and higher, and I’m getting older and older.

Amanda Palmer had David Byrne as a guest the other night. Madcap delight ensued.

If you stop moving long enough, ants will eat you. Especially if you are a dead lizard.

Behold the WALL OF RUXPIN!

I’m sure enjoying the right-wing freakout on this stuff, but really the most bizarrely delightful aspect of this turn of events is that it means Romney must spend the summer campaigning on the promise of repealing a health care plan authored by the Heritage Foundation that he implemented at the state level in Massachusetts.

This DEA bureaucrat will not admit, under pointed and repeated questioning, that heroin and crack are more dangerous than marijuana.

She will not do so because her job and her agency depend on everyone believing something false: that all these drugs pose an existential threat to the country, and that they must be eradicated, and that aggressive law enforcement activity is the right path, and that (moreover) this mission is possible without destroying civil liberties as we know them. Funding depends on this. Jobs depend on this. And so she continues to lie.

That she may even believe the lie does not make her any less of a liar.

At The Awl: “After being ejected from the Zoo, and then the park altogether, anti-Semitic Elmo was taken away in an ambulance for psychiatric observation.”

They’re set to steer tens of millions of dollars into the new privatization program, which pays for vouchers that parents can use to send their children to religious schools. Gov. Bobby Jindal said the state was “changing the way we deliver education,” which is a lot like Domino’s saying it’s changing the way it delivers pizza by locking up the store and telling everyone to buy a Hot Pocket from the Vatican. In any case, Louisiana Republicans loved the plan. Until a group of folks showed up to ruin the whole thing: Muslims.

I just wen to lunch. I rode my bike the six blocks rather than walk, because that would lead to a net lower amount of exposure to the HOLY JESUS ON A POGOSTICK ITS HOT weather we’re having.

People in Abu Dhabi asked me how I liked the heat in exactly the same way Chicagoans will ask the reverse question of visitors in January. The locals seemed mildly disappointed that I was able to report, after a little arithmetic, that the coast of the UAE isn’t much hotter or more humid than Houston. We’re normally a little cooler — 95, not 105 — but some days we lose the gap.

Today’s one of those days.

(I will say the flight home led to the only time I’ve ever gotten off a plane in Houston and felt mild relief and not oppressive humidity; all things are relative.)

This post over at BoingBoing about the ubiquitous-in-the-non-western-world squat toilet reminded me of the mild anxiety I had about facilities before I got to the UAE, and how absurd that seemed after I arrived. See, the Emirates — especially Abu Dhabi and Dubai — are pretty new places, and very focused on foreigners. I saw no squat toilets as a result.

What I did see were the modern nods to the traditional “left hand and a bowl of water” approach still used by most of the planet, but without removing the modern facilities westerners would expect.

In my hotel it took the form of an unexpected addition: “Hey! A bidet!” 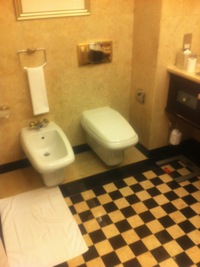 But elsewhere the facilities were much less continental. This is from an apartment in Dubai: 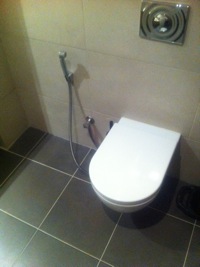 On an unrelated note, both showers I used over there were materially better than any American one I’ve ever seen. This is why: 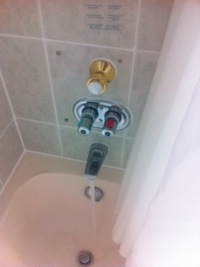 Yeah, they’re trying to force the issue now. Check your profile; they’ve replaced the email you elected to show in your profile with your special “@facebook.com” email address.

Fortunately, it’s easy to fix, but let this remind you that Facebook will absolutely change your preferences to suit their needs. You are not their customer. You are their product. Behave accordingly.

Folks widely expect the Supreme Court to strike the mandate provisions of the so-called Obamacare bill despite widespread belief among nonpartisan Constitutional scholars that the mandate falls within the norms established by Wickard and referenced by this same court, and by Scalia specifically in the Court’s prior opinion that Federal law trumped state efforts to legalize the personal cultivation of marijuana for personal use.

The ugly and obvious fact is this: Scalia and his right-wing cronies rule based on politics, not the law. (N.B. that as apparent cover for his no-doubt predetermined vote on ACA, Scalia has published a book in which he disavows Wickard!) They work backwards from the desired outcome, not forwards from established precedent and legal principle. Moreover, they’re willing to blow established precedent when it suits them, as in Citizens United and, most likely, this ACA case w/r/t Wickard.

James Fallows has more over at the Atlantic. You should read it.

Bonus hilarity: Who wants to bet the same 5 conservative justices would uphold ACA if it had been a continuation of Romneycare under a Republican president?

Still haven’t finished the Abu Dhabi commentary, but I will note that the building on this list that’s in Abu Dhabi was on my route out of town towards Al Ain. I wondered at the time if the facade had a job; it’s cool to see that it’s not only functional, but far more interesting than I expected.

I’ve been too busy to post much lately, so there was no long exegesis about the selection of the new official Heathen two-wheeled muscle-driven vehicle, but I think it ought to go without saying that it needs one of these to be complete, don’t you?

Would you be shocked to discover the answer is zero?

At a forum conducted by National Journal yesterday on aviation security, John Halinski, TSA’s Assistant Administrator for Global Strategies, claimed that the TSA mission was to protect passenger security. Not so. The difference in mission between what one of the administration’s top security executives and the TSA website claims makes a big difference in how the U.S. is spending time and money regarding “ensuring freedom of movement for people and commerce.”

Halinski was asked directly whether there has been even a single instance of an arrest or detention of anyone, in any way, related to terrorism based on airport whole-body scanners. His answer was, “No.” Of course, he then went on to assert that the mere fact that we have these whole-body scanners is keeping terrorists away. (Evidently, terrorists don’t have access to websites that tell them which airports have whole-body scanners and which don’t.)

I saw Prometheus and enjoyed it as a great spectacle, but left feeling like I’d eaten junk food. Film Crit Hulk explains why perhaps better than I can. The central issue? A Lost alum as the primary screenwriter.

The new Retina-display MacBook Pro](http://www.apple.com/macbook-pro/) can apparently drive three external displays in addition to its built in screen.

By comparison, my current 2-year-old model drives one extra monitor.

Guns & Tacos is on the story. Don’t miss this.

This is just absurd. As is often the case, we can find civil forfeiture laws contributing to this bizarre pursuit.

Other sources are picking up on the fact that the FBI is creating its own terror plots to foil, possibly causing them to miss real ones.

It somehow became an article of faith on the right that Obama is “the most extreme President in American history.” Although when they say that, I think what they really mean is, “He’s black.” — Bill Maher

Once Washington was a happy place where a girl and her mother could be groped simultaneously in good fun by a white supremacist. Sadly, it has all been ruined by Kim Kardashian and Ezra Klein.

It’s from this takedown of Sally Quinn in reference to her absurdly hilarious piece here, as quoted at Electrolite.

Heathen nation, which of the following do you think was hardest for me to acquire in my stay here in the capital emirate?

The Supreme Court on Monday let stand a lower court decision that said federal officials cannot be sued for damages for the torture of Americans on U.S. soil.

In other words, the Feds can waterboard the hell out of you while holding you secretly and without trial, and you have no legal recourse.

Someone needs to explain to me very quickly how this doesn’t make it legal for the government to disappear people, a la Pinochet.

This guy decided hide and seek, his toddler, and his head-mountable video camera made for a great combination.

It turns out that the super awesome travel speaker I use and the new fancy pastel-colored Jambox from Jawbone are very nearly exactly the same device under different branding.

(I actually don’t have the Bluetooth model, but other than that…)

The May 28 New Yorker has a fantastic (and long) story on the extraordinary exploits of William Alexander Morgan, the American ne’er do well and wanderer who became the only American Comandante in the Cuban revolution (there was, apparently, only one other foreigner with that title).

We likely forget that there was a coalition of forces united behind Castro thanks to the excesses of Batista’s regime. Morgan joined a band of revolutionaries who were also ardent anti-communists; his star fell as Fidel moved to the left and the same sort of totalitarianism that doomed Batista, with predictable results, but the man’s story reads like something Hemingway could’ve written.

(Know anything about this cat, Gar?)

I promise lots of UAE trip material, but work here has been such that I’m barely seeing anything but my laptop so far. Case in point: 21 project hours logged today. Put another way, when I called Erin just now to say I was finally going to bed and therefore ending my workday, she was also getting home from work and ending hers.

David Simon has seen the Wire musical thing, and loves it.

Stay with it through the chess scene, at least.

Hear the word of Batman.

Mrs. Landingham — known outside the West Wing as Kathryn Joosten — has [passed on](http://www.metafilter.com/116582/You-know-I-could-beat-you-up-anytime-I-want-sir]. She was 72.

“Completely Awesome Ventriloquists”. No, seriously. Longtime Heathen may recall she’s appeared here before (though, sadly, that video link is dead — she’s the one with the monkey), but Nina Conti is back with a ridiculously entertaining new bit of meta-ventriloquism. Enjoy.

Just busy busy busy. And traveling. And going to Dubai later. And buying a new air conditioner. and watching Willie Nelson and Snoop Dog. And not making any of this up. I swear.