In which a young Irish man has a bit of fun with his dad over his driving test:

Most decidedly not safe for work.

Last night we got a (delicious) smackdown of a SuperBowl. Heathen Central didn’t have a normal dog in the fight, but ended up rooting for Seattle for two reasons:

Add in a little bit of underdog-ism — Seattle’s never won the Super Bowl, but playing in one and winning is old hat to Peyton and the Broncos — and it’s good enough for us. (And enough to overcome a distaste for Pete Carroll.)

Turns out, a more smashmouth, old-school style of football — dare we call it “SEC”? — still works in the NFL, and that was nice to see. As they say, defense wins championships.

However, it made me wonder about the SuperBowl and margins of victory. I thought I remembered a time when the big game was almost always a blowout, but over time there’s no real clear trend. Most of the Super Bowls have been fairly close — 56% of them were won by two touchdowns or less. Increase the margin to three touchdowns, and you’re over 77%.

Actual blowouts — which we’ll define as four touchdowns or more — have actually been pretty rare: only 6, or about 13%. Yesterday’s was the first such victory in 20 years. They were (SB record in bold):

It’s clear where my sense of “blowouts are the norm” comes from, considering that 5 of the 6 blowouts happened when I was in high school and college and was paying attention as a quasi-adult for the first time. Overall, the game is usually close(ish), as the data shows.

Anyway, because I’m a dork, here’s a graph: 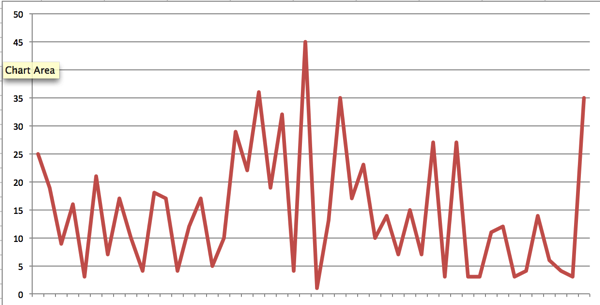 Apparently, some right wingers were pretty upset by the Coke spot last night.

As a direct result of this kerfluffle, I’ve been made aware of the delightful WhitePeopleMadAtThings Tumblr site. Enjoy.

I came across this trailer a few minutes ago, for a rom-com (otherwise forgettable, I suspect) starting Fran Kranz (Dollhouse, Cabin in the Woods, Much Ado About Nothing) and Dichen Lachman (Dollhouse).

The trailer includes Felicia Day plus a good chunk of the cast of Dollhouse, so I went over to IMDB, expecting to see that it was written or directed or produced by the guy who usually drives this particular company… and yet, no.

I dunno about you, gentle Heathen folk, but that would freak me right the hell out. It’s horrifying and scary, but it’s the situation in which Fulbright scholar David MacLean found himself back in October of 2002. Local authorities initially took him for a shattered junkie, but the actual culprit turned out to be a then-commonly-prescribed antimalarial drug called Lariam.

What follows is MacLean’s harrowing and fascinating road to something like recovery. He doesn’t shirk the hard questions, either; much of our identity and sense of self is tied up with what we’ve done, and how we remember what we’ve done — but MacLean was robbed of this. On his trip home to Ohio to recuperate, he met his girlfriend, who was of course a stranger to him. He develops the ability to fake recollection, but all the while he’s really completely adrift and unconnected; he knows no one, and is vaguely threatened and alarmed that all these people seem to know him.

I’ve spoken to MacLean here in Houston, at a reading a few years ago. At that time, he had recovered much of his memory — but not all of it. He had no memory of his sister’s wedding, for example. But regaining what he did regain was a long road, and it begs the question of whether or not post-Lariam MacLean is the same person as pre-Lariam MacLean, and of what that sort of person-hood means. There’s no easy answer here.

It’s a fascinating read; I devoured it in a couple days, and would’ve read faster if I hadn’t been so busy with other things. You oughta read this book, for sure.

By the way, despite a series of these episodes, including suicides among US Special Forces, the drug is still widely available. However, the US military kept giving it to SF troops until last September. Worse, the military used mega-doses of it on all incoming detainees at Gitmo in an attempt to trigger psychological distress. (That’s not on the Wiki page, but it’s documented in MacLean’s book.)

Remember this drug, and make sure you don’t ever take it. The trade name (from Roche) is Lariam, but it’s also available as a generic under the name mefloquine. DANGER DANGER DANGER.