Our ersatz hometown airline is responsible for fully 1/3 of all DOT complaints in the first half of 2012.

This dog DOES NOT WANT lowfat jerky.

Like many folks, I enjoyed more than my share of the Doors as a teenager. And, like most, I outgrew them. One thing, though, that’s always sort of fascinated me about them was that Morrison’s father was an admiral, an in fact is Wikipedia notable in his own right.

Anyway, what popped up randomly this morning is this 9-minute video of Read Adm. Morrison and his daughter being interviewed about Jim at some point in the last several years. It’s clear the admiral really had no idea how big Jim was, or how influential, or really even what the appeal of the music was, but that’s more or less to be expected; the man was born in 1919.

Astronaut Don Pettit would like to show you yo yo tricks in zero g.

Also, how nerdy am I that one of my takeaways was “wait, you can get a yo-yo with ball bearings?”

I have, as most Heathen know, quite a few pix available over at Flickr.

Sometimes, I get an email notice that someone has made one a favorite. This is almost always a friend or relative expressing enjoyment of a photo of some other member of our extended family or circle of friends.

Today, I got a favorite notice from a name I didn’t recognize at all, for a relatively odd picture from a clown-themed fundraiser a few years ago: 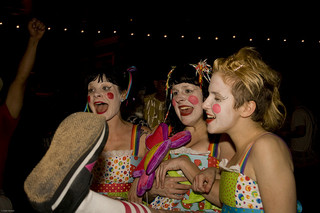 The user has no photos of her (?) own to peruse, but checking her list of favorite pictures was, well, revealing:

Very well then. Carry on.

Les Miles is giving a press conference right now announcing that Tyrann “Honey Badger” Mathieu has been booted from the team for unspecified team/school rule violations.

Cloud Atlas, because the text is rich and rewarding, and the movie is coming in October.

So, here’s the sequence:

I don’t think you need anything else to declare the modern GOP completely worthless. I really thought this Onion story was satire, but I’ll be damned if it doesn’t look exactly like this situation.

Google, as it turns out, has a pretty incredible death benefit.

Apparently, there’s a school in Louisiana that is demanding some girls take pregnancy tests; those who refuse, or who are determined to be pregnant, are kicked out of school.

It’s like the axis of MS-LA-AL is in some kind of demented race to the bottom.

First, let me preface this by saying “behave accordingly” doesn’t mean “eschew the cloud.” Networked, connected computing can give us far too many benefits to abandon as a concept. However, as is often the case, new paradigms mean new risks and new ways of protecting yourself.

Now, read this terrifying article. The subject of the hack is a tech journalists who should have known better, and could have ameliorated the damage done with some very simple steps. That he did not have backups of his primary machine is, frankly, mind boggling — especially when it was the only place his digital photos of his newborn daughter were stored. (Really? On a Mac, with Time Machine as an option? WTF?)

If you’ve read the whole thing, either now or before, you know the drill:

They did all this because they wanted his Twitter handle, no shit. What they could have done, but did not, was extend their nefariousness to his financial life; after all, they had full control of his email.

Hey Chief Heathen, What Should I Do? 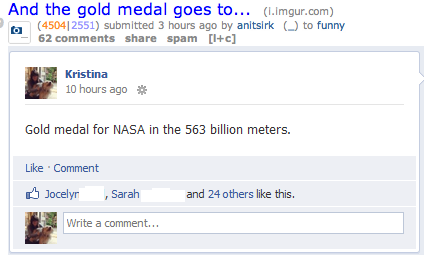 The NYT’s interactive feature about sprinter times in the Olympics is really, really great. It’s an awesome example of how good presentation and design can make a giant contribution to clear communication.

N.B. that there are similar features for the long jump and the 100 meter freestyle.

Tell me again how successful our manic drug freakout has been.

Fire Tennis is not yet on the slate for the 2014 Olympics, but there is, you know, time.

Breaking Bad is racking up the praise at this point like nothing since the Wire, so I’ve been meaning to dive in — but, at this point, with four seasons in the can and another one in progress, that’s a rather daunting prospect. Especially when it’s exactly the sort of show (violent, bleak) that Mrs Heathen wants no part of. (We are sometimes accused of un-Americanism because we have only one TV.)

However, she’s out of town this weekend, and I have the first 2 seasons on DVD on loan from a friend. So, since Friday evening, I’ve watched the entire first season (only 7 episodes) plus over half (8 of 13) of the second season. It’s network TV, not pay cable, so each episode is only about 47 minutes, but that still means it’s been a pretty serious binge.

It started simply, which is fitting for a show about meth: I watched the first two episodes on Friday night before I stepped out for a party.

Then I went a little nuts. On Saturday, after lunch, I sat down and watched SEVEN EPISODES IN A ROW — over six hours of this bleak cancer-and-meth extravaganza. And I only quit because I wanted to go catch a band. Then, when I came home, I watched ANOTHER episode.

Today, I spent the bulk of the afternoon doing something really incredibly geeky with four other people, but I got back from that at about 7. It is now 11:47, and I’m still up because I have a con call with Abu Dhabi in 13 minutes. But for that con call, I’d still be watching Breaking Bad, but as it is it appears that I’ll have to content myself with only five episodes today.

For devoted fans, I’ll note that my latest episode is the 8th of season two, which is where we’re introduced to Bob Odenkirk‘s character, Saul Goodman. Who is AWESOME. Also awesome: the entire “wrong bald guy” sequence.

The show is not the equal of the Wire, but I can absolutely say that Bryan Cranston has deserved every nice thing said about him here — and more. The evolution of Walter from the first episode is astounding. His ability to channel that prior Walter becomes more and more unnerving as the choices he makes take him further and further into damnation.

You really need to watch the trailer for Cockneys vs. Zombies.

You will feel very, very old when you click this link and discover that the title is what John Scalzi’s daughter said to him when he described, to her incredulity, that the “M” in “MTV” stands for “music,” because they used to play music videos exclusively.

I noticed earlier that conference realignment in the SEC has put an end to one of my favorite little stats: the fact that Alabama has a winning record against everyone in the SEC. Missouri and Alabama have played only 3 times, but Mizzou took 2 of those games.

I’m sure this is something Alabama will fix as quickly as possible (they play this year, which should at least even it up, but scheduling voodoo is such that it may take a while to get the third win), but it got me wondering: Who has a winning record vs. Alabama nationwide?

Turns out, not many folks do. This site and this site both have lists, but (somewhat amazingly) the first one misses Texas, and therefore makes a completely incorrect assertion by stating nobody who’s played Bama more than six times comes out ahead. Texas was for years 7-0-1 vs the Tide; they didn’t lose to Bama until the 2009 title game, but they’re still way out ahead.

Anyway, if we look at both lists and eliminate the 1-game-wonders (as statistically meaningless) as well as any team that no longer exists or plays football, we’re left with ten squads:

Alabama opens against Michigan; there’s a strong potential to even up the record there. As I noted above, they will play and probably beat Missouri on October 13. I can’t imagine Alabama scheduling any of the rest of these teams on their own, so those records, like the Michigan record after this year’s game, will likely stay where they are until the Magic Bowl-Scheduling Hoodoo produces another matchup. But it’s a pleasantly short list that’s pleasantly short of meaningful gaps. Perhaps Alabama should slot in a rebuilding Texas and perennially hapless Irish to fix those two records after all.

I’m sure Gore Vidal hated it when people called him gloria, though.

(Seriously, you don’t get many obituaries as much fun as this one. I’m sorry it omits the oft-repeated anecdote of Vidal’s response to Norman Mailer’s literally knocking him on his ass at some party: “Words fail Mailer again!”)

The preseason coaches’ poll is out. LSU’s on top, followed by Alabama, USC, Oklahoma, and Oregon in that order.

FIVE of the top ten are SEC squads.

If Alabama wins their opener against #8 Michigan, look for them to slide into the top spot. LSU’s slate is front-loaded with serious creampuffs; they don’t play in-conference until Auburn on September 22. They also don’t play a ranked nonconference team all season.

The Atlantic wonders: “What’s that weird tape some of the Olympians are wearing?” The knee-jerk response is that, gosh, if actual Olympic-level athletes are wearing it, it must do something, right?

Not so much. Hey, why assume they’re any smarter than baseball players, right?

This slow-motion, high-definition footage of great white sharks breaching to snap up seal decoys is pretty amazing. Giant animals, completely out of the water. Eek.

Also, it appears that some of these scientists may need a bigger boat.

The Business of Bond explores the budget, domestic and overseas box office, and profitability of the (real) Bond films. Seriously neat. Check it out.

We always said we didn’t want any kids, but…